The war for freedom rages on.

Russia’s despicable invasion of Ukraine has become the largest land war in Europe since the ravages of World War II destroyed the continent, 77 years ago.

The world has united in support of Ukraine – pouring in weapons, and other materiel, and imposing unprecedented economic punishment for the Russian banking system, oligarchs, and has begun to isolate the country.

More needs to be done.

Fears of nuclear conflict between NATO and Russia have driven the West’s decision not to engage directly with Russian forces. The theory is, a no-fly zone would thrust NATO aircraft and military defense systems into directly destroying Russian military assets — an escalation which could lead to the hot war spilling out over the European continent, like 77 years ago.

Igor and his wife have courageously made the decision to stay in Kyiv with their two daughters, they’ve decided to take a stand, to stay in their home.

He has called this war, the first “Social Media” war and also the first “three-dimensional war” — being fought on three interacting fronts — economically, militarily, and through information technology.

Igor says there will be lessons learned from this war, and that his intention is to consolidate and help spur the changes needed — a defiant Ukraine against Russian aggression has united the world in knowing now that democracy and freedom cannot be allowed to slumber, or it will be gone.
__________
The National Bank of Ukraine has decided to open a special fundraising account to support the Armed Forces of Ukraine. Please go to the NBU website to make a contribution to help fight for Ukrainian freedom.

Pictures and videos included from Ukraine portfolio from 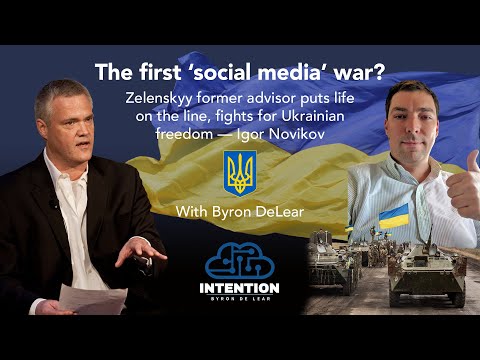 The war for freedom rages on. Russia’s despicable invasion of Ukraine has become the largest land war in Europe since the ravages of World War II dest...