Tonight, a world exclusive from Kabul: Christiane speaks with deputy Taliban leader Sirajuddin Haqqani, currently serving as Afghanistan's Interior Minister. Haqqani is a United Nations-labeled Al Qaeda member, head of the feared extremist Haqqani Network, and is on the FBI’s Most Wanted list. He has never before done an interview with his face showing and has never been on-camera with a Western news organization -- and certainly not with a female journalist. Since taking power nine months ago, the acting Taliban government has made many promises to gain recognition by the international community and to persuade it to lift sanctions. The Taliban also seeks recognition by its own people as a legitimate government after America’s chaotic withdrawal. The U.S. government, saying Haqqani has American blood on his hands, has offered a $10 million reward for information leading to his arrest. He’s wanted for questioning in connection with a January 2008 attack on a hotel in Kabul that killed six people, including an American citizen. Yet top Western officials also cite Haqqani’s anti-terrorism measures while in office, and women he has working in his own ministry. Tonight, Part One of Christiane’s exclusive conversation with Sirajuddin Haqqani.

Subscribe to the Amanpour and Company. channel here: https://bit.ly/2EMIkTJ

Subscribe to our daily newsletter to find out who's on each night: http://www.pbs.org/wnet/amanpour-and-company/newsletter/

For more from Amanpour and Company, including full episodes, click here: https://to.pbs.org/2NBFpjf

Amanpour and Company features wide-ranging, in-depth conversations with global thought leaders and cultural influencers on the issues and trends impacting the world each day, from politics, business and technology to arts, science and sports. Christiane Amanpour leads the conversation on global and domestic news from London with contributions by prominent journalists Walter Isaacson, Michel Martin, Alicia Menendez and Hari Sreenivasan from the Tisch WNET Studios at Lincoln Center in New York City. 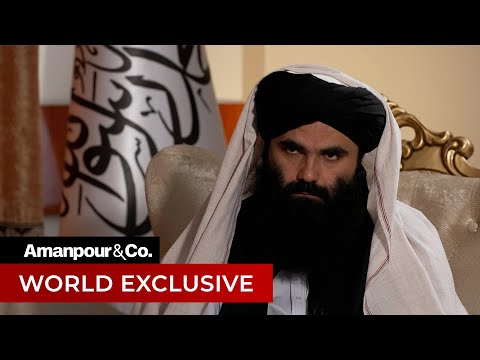