Will We See Grogu Again?

JediJoie @JediJoie
What are your favorite Star Wars sound effects? (let’s be quick and pick one each, our MOST favorite)

Bruce Natalio @NatalioBruce
Who will be the first ST character to appear again in live action? (we will answer this under the impression Bruce means a character introduced in the ST)

Lonnie @Brightestdaze
What do you hope for more in the next trilogy, a continuation of Rey's story or something set years prior to A New Hope? For instance, High Republic era or Old Republic era?

Alex Zoukas @Zoubacca
With the Knights of Ren appearing in the War of the Bounty Hunters comic, could they possibly make an appearance in any live action show such as The Mandalorian or even the Ahsoka series?

SleepingMoose @SleepingMoose
Do you think we'll ever see Grogu again, or is his arc done forever? If so, how much time will have passed since he left with Luke?

Rebel Scum Texan @RebelScumTexan
Since snacks are often a topic of interest at the front of the show, which Star Wars character would store pop tarts away for themselves and not share with others?

PJBushell @pj_bushell
Which SW novel would you like to see get the live action treatment?

Double C @Double_C_21
#StarWars say we had gotten Or We do finally get a Part 2 and Part 3 of A Solo story, What are the Major pieces of Solo's story you want to see Told? #MakeSolo2Happen

PODRACER: General Andrew Staley
QUESTION: Being that we hear Ahsoka’s voice speak to Rey in The Rise of Skywalker among the physically dead Jedi, do you think she will meet her demise in the her series? Why or why not?

Special thanks to Matt Pasterick for our theme song!

Will We See Grogu Again? 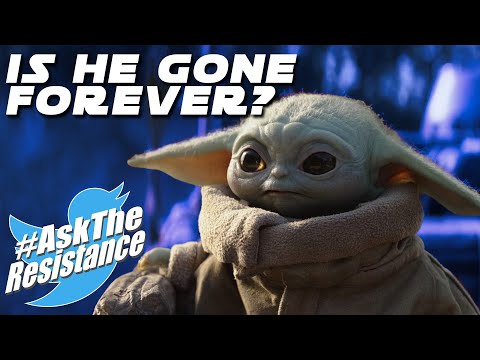 Sec 1) Ask The Resistance! JediJoie @JediJoie What are your favorite Star Wars sound effects? (let’s be quick and pick one each, our MOST favorite) Br...