In this episode, Santosh shows the footage of the market where the vendor cart was stolen. The footage shows that a woman is cutting the chain and stealing the cart. Karishma and Urmila get the same plan but in different styles to find the real culprit. Will they be able to catch him? Watch the full episode now.

About The Show:
-----------------------------
Set in Lucknow the show is based in one such all-women Police station made by 4 beautiful quirky women. Pushpa, the oldest of them, is the head constable who tries to balance her life between home and work. Karishma, the Sub Inspector, is fish out of the water as she is at loggerheads with the philosophy of the police station. She beats before she talks but now she has to solve all cases through reconciliation. Santosh Sharma is a young new recruit and a typical lonely girl in the city. The head of the pack is S.H.O Haseena Mallik, witty, romantic leads by example. The common challenge for all these women is to bring sensitivity to their policing while dealing with cases that come to this police station. Hence their solution is most unusual. The characters and the cases add to the fun and humor of the show. While Pushpa and Karishma are the saas-bahu duo, who keep us entertained by their Squabbles, it is Haseena - Karishma's ideological differences that add to the drama madam and comedy. 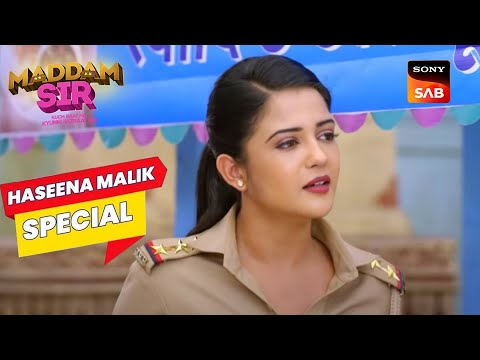 In this episode, Santosh shows the footage of the market where the vendor cart was stolen. The footage shows that a woman is cutting the chain and ste...