Who are the real criminals? Making the case for abolishing criminology

While the calls for abolition grow louder in the aftermath of the renewed global Black Lives Matter movement, Chelsea Watego considers the complicity of criminology in state sanctioned violence in the colony.

In the wake of the 30th anniversary of the Royal Commission into Aboriginal deaths in custody the silence of criminology was deafening. Yet, their presence in strengthening carceral responses to youth justice reforms, assaults against first responders, and coercive control in Queensland and beyond, has one questioning who the real criminals are. Criminology, Watego asserts, is part of the prison industrial complex, intellectualising the racial violence Blackfullas are subject to, and in its refusal to see the state itself as perpetrator. If abolition is to be realised in the colony, then criminology too must die.

About the John Barry Memorial Lecture

The Honourable Sir John Vincent William Barry, Judge of the Supreme Court of Victoria from 1947, and Foundation Chairman of the Board of Studies in Criminology at the University of Melbourne from 1951, was a distinguished graduate of this University. Each year, the John Barry Memorial Lecture seeks to inform and educate on topics of criminological significance.

Who are the real criminals? Making the case for abolishing criminology 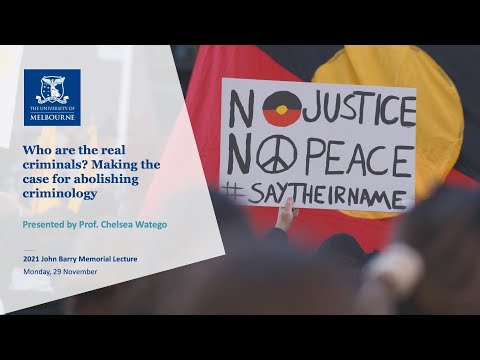 Presented by Professor Chelsea Watego. While the calls for abolition grow louder in the aftermath of the renewed global Black Lives Matter movement, C...