Where Did They Go? There Are 107 Million Working Age Americans That Do Not Have A Job Right Now

The United States is in the middle of the worst shortage of workers in history. At the moment, every industry in the country is short-staffed and we are already seeing major disruptions occur due to the lack of qualified labor to perform the basic services our society needs. Many famous CEOs and business owners recently made the headlines complaining about the declining number of members in their staff. However, official numbers released by the federal government have been telling us a different story. They have been suggesting that there's no worker shortage, no unemployment crisis and that things are going fairly well in our labor market.
Recent data shows that there are currently tens of millions of job openings all across the nation. Employers have been so desperate to find new workers that they have been offering some generous bonuses, gifs, trips, and of course, dramatically raising wages to attract new employees. But even though all of this is happening, people are still not coming back. Nationwide, there are currently 100,450,000 people out of the labor force, up 38,000 from September numbers. October was the 14th straight month that the number of people out of work has remained above 100,000,000.
But that figure doesn't give us the full number of working-age Americans sitting on the sidelines because it doesn't include those who are officially unemployed. That number, according to the Federal Reserve, currently stands at 7.4 million, which gives us a grand total of more than 107 million people out of the workforce. With so many people on the sidelines, the labor market participation rate has remained stubbornly low in recent months, and it did not budge in October. Of course, this is already having a toll on the economy. In a recent note, the Congressional Budget Office pointed that such a low participation rate in the labor force is threatening to shrink our gross domestic product, compromise our economic growth this year and generate further federal outlays, as many who are not in the labor force are likely to enroll in federal benefit programs.
So far, the government hasn't shown much concern about this situation. But the fact that we went from a historically low unemployment rate before the health crisis to a severe lack of workers should be very alarming to all of us. After all, our workers are the backbone of our society. Right now, many of them are being impeded to do their jobs because of local mandates. And tens of millions as on the verge of losing their jobs as the Occupational Safety and Health Administration (OSHA) mandate goes into effect. The agency said that companies that fail to comply would face penalties of nearly $14,000 per violation. Repeat offenders or those found to be willfully non-compliant can face a fine of $136,532, according to a White House official.
It’s official. We now live in an authoritarian nightmare. Although we're already facing an acute shortage of workers, the federal government's measures are about to make this crisis even worse. On Twitter, the Co-Founder & President of RealClearPolitics, Tom Bevan, has expressed his concern about the consequences this mandate will have on our supply chains. "All the biggest trucking companies in America - who already face major driver shortages - will see a % of their workforce quit. The supply chain crisis is going to get much worse - very soon," he warned. It feels like they want to make it so that there is no escape. If people don't do as they're told, they will be unable to work anywhere. The threat of unemployment goes beyond the loss of a job and a steady source of income, it means that millions of people may lose the comfortable lifestyles they spent years building for themselves and their families.
In the short term, the national and local mandates will keep forcing millions of millions of highly qualified Americans out of their jobs. Needless to say, enforcing these measures while we're in the midst of the worst worker shortage in our history is absolutely insane. When it comes to the long-term, these measures may result in another economic slump and also worsen the political divides in our country. People say that a house divided shall fall, and given that we're now facing divisions that may never be repaired, it seems like the stage is set for a societal meltdown of epic proportions.

Where Did They Go? There Are 107 Million Working Age Americans That Do Not Have A Job Right Now 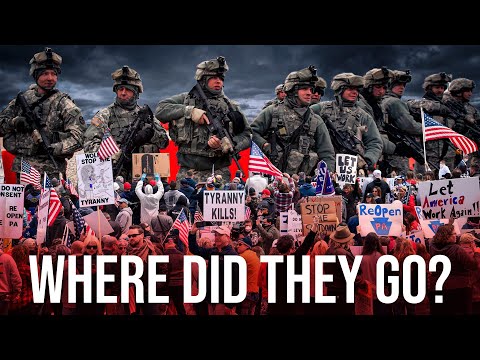 The United States is in the middle of the worst shortage of workers in history. At the moment, every industry in the country is short-staffed and we a...