Claim your SPECIAL OFFER for MagellanTV here: https://try.magellantv.com/itshistory. Start your free trial TODAY so you can watch “vertical city” about Sears Tower, and the rest of MagellanTV’s history collection:  https://www.magellantv.com/watch/vertical-city-rediscovering-great-heights-around-the-world?type=e&episode=the-sears-tower-chicago

The Willis Tower (originally the Sears Tower) is a 108-story, 1,451-foot (442.3 m) skyscraper in the Loop community area of Chicago in Illinois, United States. Designed by architect Bruce Graham and engineer Fazlur Rahman Khan of Skidmore, Owings & Merrill (SOM), it opened in 1973 as the world's tallest building, a title that it held for nearly 25 years. It is currently the third-tallest building in the Western Hemisphere, as well as the 23rd-tallest in the world. Each year, more than 1.7 million people visit the Skydeck observation deck, the highest in the United States, making it one of Chicago's most popular tourist destinations. The building occupies a site bounded by Franklin Street, Jackson Boulevard, Wacker Drive, and Adams Street. Graham and Khan designed the building as nine square "tubes", clustered in a 3×3 matrix; seven of the tubes set back at upper floors. The tower has 108 stories as counted by standard methods, though the building's owners count the main roof as 109 and the mechanical penthouse roof as 110.The facade is made of anodized aluminum and black glass. The base of the building contains a retail complex known as the Catalog. The lower half of the tower was originally occupied by retail company Sears, which had its headquarters there until 1994, while the upper stories were rented out. The structure was known as the Sears Tower from its construction until the naming rights were included in a 2009 lease with the Willis Group. Local area residents still refer to the building by its old name. As of April 2018, the building's largest tenant is United Airlines, which occupies around 20 floors. Other major tenants include the building's namesake Willis Towers Watson and law firms Schiff Hardin and Seyfarth Shaw. Morgan Stanley became the building's fourth-largest tenant in 2017.

Join this channel to get access to perks:
https://www.youtube.com/channel/UCzIZ8HrzDgc-pNQDUG6avBA/join

» NOTICE
Some images may be used for illustrative purposes only - always reflecting the accurate time frame and content. Events of factual error / mispronounced word/spelling mistakes - retractions will be published in this section. 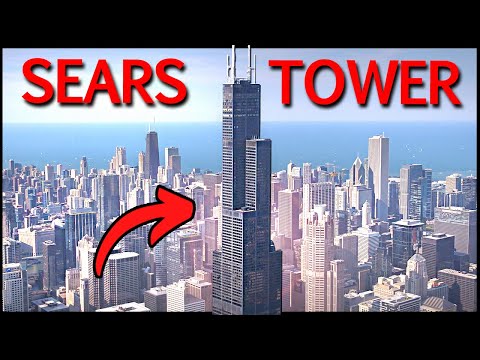 Claim your SPECIAL OFFER for MagellanTV here: https://try.magellantv.com/itshistory. Start your free trial TODAY so you can watch “vertical city” abou...