Week in Review: lawsuits, corporate changes, and the legislature

On Friday, Seattle Public Schools filed a lawsuit against the parent companies of TikTok, Instagram, Facebook, Snapchat and YouTube, alleging that the social media platforms increase student’s anxiety and depression. It also alleges that the platforms are designed to keep users online for long lengths of time, and that can also contribute to cyber bullying and not enough sleep. How much legal merit does it have?

Microsoft announced that beginning January 16th that it would be giving employees unlimited time off. Calling it “Discretionary Time Off” corporate holidays, leaves of absence, and time off for sick days, mental health, jury duty, or bereavement will be in addition to this new policy, according to Verge. Companies like Netflix and General Electric have their own version of a similar policy. Meanwhile, Starbucks announced to its employees that effective Jan. 30, all partners within commuting distance are expected to work a minimum of three days per week in person. It sighted the need “to rebuild our connection to each other and synchronize teams and efforts.” Why are these companies are taking their actions?

As part of a rate increase agreement, a financial incentive will be offered to roughly 10,000 Puget Sound Energy customers to switch from gas heat to electric, in an ongoing effort to have PSE reduce and eventually eliminate greenhouse gas emissions. Puget Sound Energy has around 850,000 natural gas customers, versus 1.2 million electric customers. Is PSE banning gas heating, or incentivizing?

The 2023 Washington legislative session got underway this week, with the focus expected to be on things like affordable housing, homelessness, education, and gun regulations. Also, McClatchy reported that lawmakers have been claiming “legislative privilege” for the past year in order to sidestep a Public Records Act that requires them to release emails and phone records, among other documents. Which legislative issue stands out the most?

A new lawsuit claims that the Seattle Graffiti Ordinance is unconstitutional. It was filed by four people who were arrested in 2021 for writing political messages on the barricade outside of the East Precinct with charcoal and sidewalk chalk. The complaint alleges that the Seattle Police Department enforces this selectively. What does the city say?

Week in Review: lawsuits, corporate changes, and the legislature 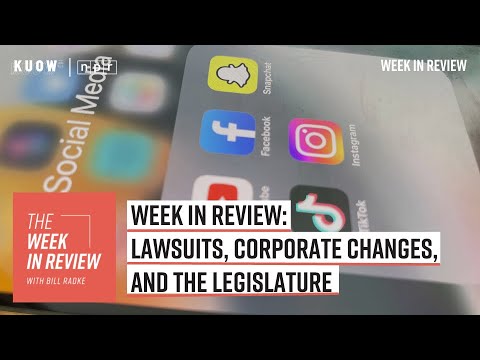