During the Jan. 6 committee hearing on June 21, former Georgia election worker Wandrea ArShaye “Shaye” Moss told the committee that claims Trump lawyer Rudy Giuliani made in a video that she and her mother were involved in a plot to count false ballots was untrue. She also detailed the extent of the impact those baseless claims had on her life, and that of her mother, who was also an election worker in Georgia for the 2020 presidential election. Trump lost the state of Georgia to Joe Biden in the 2020 presidential election.

When Moss was asked by the committee why these false claims were being made, she said she was told that “Trump and his allies were not satisfied with the outcome of the election.”When she learned her election coworkers were receiving threats, Moss told the committee that she went to Facebook to check if she had any.

“A lot of threats, wishing death to me, telling me that I will be in jail with my mother and saying things like be glad it is 2020 and not 1920,” she said. “A lot of them were racist, a lot of them were hateful.” The committee then played a video calling Moss’ mother a “vote scammer and a hustler.”

“I felt so bad. I felt bad for my mom. I felt horrible for picking this job and being the one that oh is wants to help, always there, never missing one election. I felt like it was my fault putting my family in the situation,” she said. Moss said she ended up leaving her position, as did others.

In a video the committee played of Moss’ mother, Ruby Freeman, she told them how the claims made against her changed her life.

The hearing was the fourth of several planned by the Jan. 6 committee to present its findings to the public. It focused on Trump’s efforts to pressure state legislators and local election officials to change the results of the 2020 presidential election. In the year since its creation, the committee has conducted more than 1,000 interviews, seeking critical information and documents from people witness to, or involved in, the violence that day.

Stream your PBS favorites with the PBS app: https://to.pbs.org/2Jb8twG
Find more from PBS NewsHour at https://www.pbs.org/newshour
Subscribe to our YouTube channel: https://bit.ly/2HfsCD6 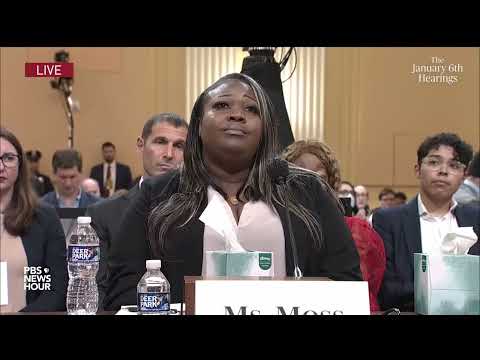