The Rail, Maritime and Transport union (RMT) should get “off the picket line and round the negotiating table” as passengers face fresh disruption from strikes, Transport Secretary Mark Harper has said.

Around half of Britain’s railway lines are closed and only a fifth of services are running as tens of thousands of workers at Network Rail and train operators stage two 48-hour walkouts starting on Tuesday and Friday.

Many places have no services, including most of Scotland and Wales.

Drivers in the Aslef union will strike on Thursday.

Picket lines have been mounted outside railway stations across the country in a repeat of what became a familiar sight last year.

Mr Harper told Times Radio: “There is a very fair pay offer on the table which has been accepted by two of the trade unions on Network Rail.

“I think it is time that the RMT got off the picket line and round the negotiating table to try and hammer out a deal with the train operating companies and Network Rail.”

Eddie Dempsey, Assistant General Secretary of the RMT union, says strike action is "not just about the money", after some members have reportedly lost "somewhere in the region of more than two weeks take home pay." 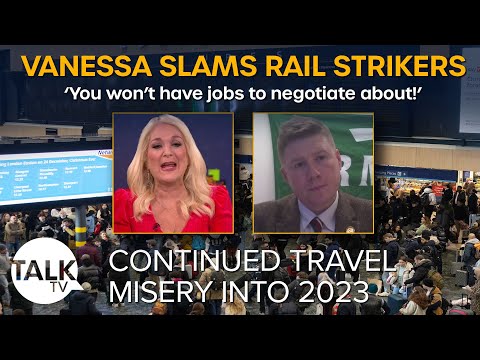 The Rail, Maritime and Transport union (RMT) should get “off the picket line and round the negotiating table” as passengers face fresh disruption from...