The United Nations Human Rights Office says China's discriminatory detention of Uyghurs in Xinjiang may constitute "crimes against humanity."
In a landmark report released on Wednesday — roughly one year in the making — the UN rights office concluded that Uyghurs and people of other Muslim groups in Xinjiang were deprived of their fundamental rights from 2017 to 2019, and potentially thereafter. "Allegations of patterns of torture or ill-treatment, including forced medical treatment and adverse conditions of detention, are credible," the report said. China has long been accused by Amnesty International, Human Rights Watch and other groups of detaining more than one million Uyghurs in the far-western Xinjiang region. The new UN report said the situation "requires urgent attention by the government, the United Nations intergovernmental bodies and human rights system, as well as the international community more broadly."

The much-anticipated report draws from interviews with former detainees and other insiders at eight separate detention centers in Xinjiang. Some detainees claimed they were made to sign contracts to remain silent about their experiences. The UN rights office also said Chinese authorities were not always forthcoming with information. The 48-page report also observed a shift from detention in what Beijing calls "vocational centers" to more formal imprisonment on criminal grounds. "This is of particular concern given the vague and capacious definitions of terrorism, 'extremism' and public security related offenses under domestic criminal law,'' the report said, saying it could lead to lengthy sentences.

The report was released just 13 minutes before UN rights chief Michelle Bachelet finished her four-year stint in the role. Bachelet has been accused of being too soft on China in the past. However, she rejected Chinese calls to withhold the report. "I said that I would publish it before my mandate ended and I have," Bachelet told the Agence France-Presse news agency. "The issues are serious — and I raised them with high-level national and regional authorities in the country." China's ambassador to the UN, Zhang Jun, said earlier on Wednesday that Beijing was "firmly opposed'' to the release of the report, which had been ready for months.
Prior to seeing the report, Zhang claimed the "so-called Xinjiang issue is a completely fabricated lie" designed to undermine China. 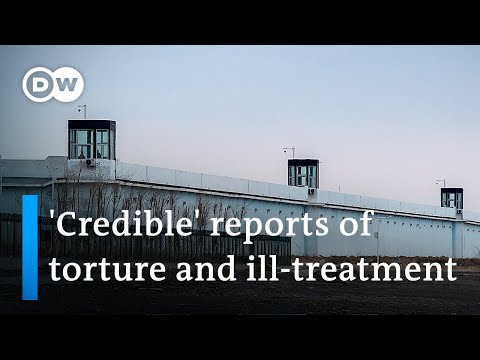