Following a strike at the company that provides janitorial services to the Twitter headquarters in California, Elon Musk decided to simply fire the group and move on. The problem is that he didn't hire a new group, so now Twitter employees are reporting foul smells and mountains of garbage because no one is cleaning up. They are also forced to bring in their own toilet paper. Farron Cousins explains what happened.

*This transcript was auto-generated. Please excuse any typos.

According to a new report from the New York Times following a strike at the company responsible for providing the janitorial services for Twitter's San Francisco office, Elon Musk made the brilliant decision to just go ahead and get rid of 'em. Right? You guys were on strike. You know what? We don't need janitorial services anyway, so best of luck in your future endeavors. And ever since that happened, according to this New York Times report, Twitter employees have been working in absolute filth. They're describing a stench that is permeating through the office into the common areas because nobody's emptying the trash. It's gotten so bad that employees are having to bring their own toilet paper in from home because there's nobody to restock the toilet paper and there's no toiletries there, even if they wanted to restock it on their own. That is how poorly Elon Musk is running Twitter.

They're working in literal garbage because of his leadership. Like it's one thing if you wanted to say, okay, listen, they're on strike. We got garbage backing up here. We've seen what happens in garbage strikes, right? So he could have done two things. One, he could have said, okay, employees, until they, uh, uh, come back to work at the end of the day, take out, take out your own trash, right? I mean, that's not hard it. It's actually a little bit concerning. I know this is an overall reflection of Musk's leadership, but at the same time, guys, if you're working in garbage, take out the garbage. Not, not that hard to figure out. You really can't be that helpless and useless, can you? Second thing Musk could have done is said, okay, they're on strike. I'm not gonna use them anymore. I'm gonna hire a different company to come in so we can, we, so I have a clean office, that that's what a good leader would would've done in that situation, to make sure things keep flowing and you're not sitting there trying to write code while sitting on a mountain of rotting garbage.

But Musk didn't do either of those things. Didn't tell people to, Hey, go ahead and clean up after yourselves. We'll break the office up into sections. You wipe this part down. At the end of the day, I'll wipe this part down. You know, basic little things. He didn't do that because he sucks as a leader, at least at Twitter. And the difference between Twitter and some of his other companies, of course, is that one of his companies, SpaceX, of course, gets massive government contracts because of those government contracts. There are certain things the company has to do, right? You can't just let everything fall to hell because you've gotta keep up with the standards the government requires. Secondly, Tesla, it's a publicly traded company. If things go sour there, you risk

The stock prices going down, which of course is what's happening anyway. But you have to keep up appearances as well. Over at Twitter, it's a private company. He can do whatever the hell he wants, and when he is left to his own devices, this is the kind of thing that we see happen. He's just letting it go to hell, both on the platform and literally in the office, because this is the kind of leader he is. People working in garbage and Musk simply doesn't care. 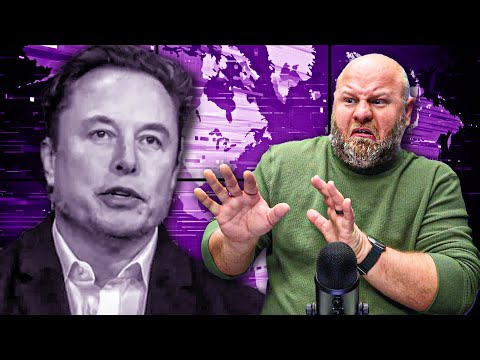 Following a strike at the company that provides janitorial services to the Twitter headquarters in California, Elon Musk decided to simply fire the gr...