Tucker Carlson has been spewing racist rhetoric playing to the fears of the far-right for years and eventually, even his Fox News co-workers cannot stand to be associated with him. John Iadarola and Adrienne Lawrence break it down on The Damage Report.

"Two longtime conservative Fox News commentators have resigned in protest of what they call a pattern of incendiary and fabricated claims by the network's opinion hosts in support of former President Donald Trump.

In separate interviews with NPR, Stephen Hayes and Jonah Goldberg pointed to a breaking point this month: network star Tucker Carlson's three-part series on the Jan. 6 siege of the U.S. Capitol, which relied on fabrications and conspiracy theories to exonerate the Trump supporters who participated in the attack.

"It's basically saying that the Biden regime is coming after half the country and this is the War on Terror 2.0," Goldberg tells NPR. "It traffics in all manner of innuendo and conspiracy theories that I think legitimately could lead to violence. That for me, and for Steve, was the last straw.""

Help build the Home of the Progressives http://tyt.com/JOIN 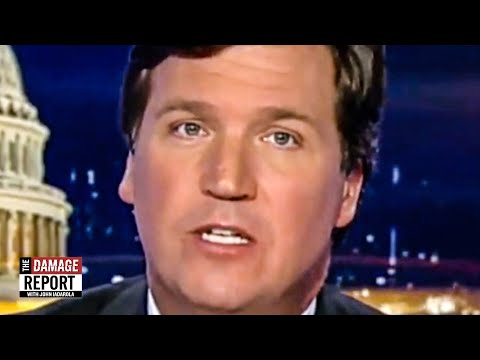 Tucker Carlson has been spewing racist rhetoric playing to the fears of the far-right for years and eventually, even his Fox News co-workers cannot st...