Eugene Scalia, who served as Donald Trump's Secretary of Labor, told the January 6th Committee that Bill Barr encouraged him to resign right after the Capitol Riot. Barr had already resigned by that time, and Scalia reached out to him for advice following the riot. That's when Barr told him that he needed to get out of there, but Scalia didn't listen. Ring of Fire's Farron Cousins discusses this.

Check out our merch by visiting our store: https://www.buyrof.com/

Former Trump labor secretary, Eugene Scalia. Yes. From that family told the January 6th committee that, uh, shortly after the Capitol riot, very shortly after he called up his good buddy, former Attorney General William Barr. Now, William Barr had resigned from the Trump administration a couple weeks prior to the January 6th Capitol riot. So Scalia as labor secretary, still a part of the Trump administration, was freaked out by what he saw that day, which by the way, he did tell the committee he blamed Trump for that. But then he said, I called my good friend William Barr, and here is how Scalia says. That phone call went down.

I had considered Bill Barr a friend, and I just called Bill to say, bill, what's your advice? What should I do? I was interested in what he had to say. You know, at the time I did not give resignation serious consideration, but I recognized it as the kind of thing that people might consider in the, in that circumstance. And Bill did tell me, you should resign. That was Bill's advice. Bill didn't say, gene, you have a responsibility to resign. He said, you know, if I were you, I'd resign. Get out of there. I continued to think about what the right thing to do was. I thought that trying to work within the administration to study the ship was likely to have greater value than simply resigning. After which point I would've been powerless to really affect things within the administration. You had less than two weeks left in office. Like, what? What were you gonna do to write the ship in two weeks? You didn't resign because you didn't want to be seen as a coward. You didn't want to be seen as one of those rats deserting the sinking ship. So you make up this, you know, bogus story. I thought I could write the ship. You know, we still had time. No you didn't. Like that was a shipwreck that was going on for four years and you think just before the last inch of the bow goes underwater, you're like, well, wait a minute. I might be able to pull this thing outta here. No,

And I have another question for Mr. Scalia. Is it possible that the reason you didn't resign is cuz you still thought that maybe Trump had a chance of overturning the election results? To me, that seems like the most plausible reason why anyone in that administration would've stayed. We did have lots of people after January 6th finally say, screw it, I'm out. Bill Barr, of course, got out before January 6th, but he was embroiled in his own crap with Trump trying to pressure him to overturn the election results. But I think the few people that did stay, again, my opinion, maybe you think something else, but I think all of the people that stayed did so because up until that last minute, they thought there could be a chance that Donald Trump stays in power and they didn't wanna lose their position in case that happened. 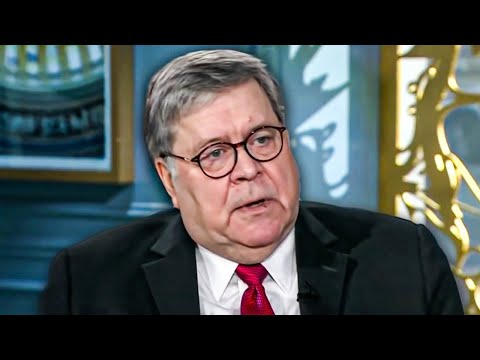 Eugene Scalia, who served as Donald Trump's Secretary of Labor, told the January 6th Committee that Bill Barr encouraged him to resign right after the...