Travis Scott | The Dark Side of Fame | The Tragic Outcome of Astroworld Fest
SUBSCRIBE: https://www.youtube.com/user/MrMccruddenmichael?sub_confirmation=1
Get 15% off our MERCH at https://permanentvacationbrand.com/ Using The Promo Code 'FAMOUS'

Almost exactly a year ago, we debuted a brand-new video chronicling the “Dark Side” of Travis Scott’s fame. There, we not only covered things like turning his back on his friend and mentor, OG CHE$$, but also how he used and abused the friendship of Shane Morris who helped Travis Scott earn far more streams and fans than he ever would have otherwise. You know, normally I would dive a lot deeper into a revelation as big as that, but today, we really don’t have the time -- because there’s an even darker side to Travis Scott then simply using other people to get ahead in life and it generally concerns his absolute disregard for the safety of other people -- most importantly, his fans. Take, for instance, the story from our video of a young man named Kyle Green who was pushed off a balcony during a live Travis Scott performance and paralyzed for life. I mean, we even ended with a side-bar that Scott had once been taken into custody for inciting a riot and endangering the welfare of his audience after a number of people were injured at a Rogers, Arkansas performance. But in all honesty – even that could have never prepared us for what went down this weekend during Scott’s most recent iteration of his Astroworld event in Houston, Texas. In others, it’s happening again – history repeats itself – and this time, the consequences are simply unacceptable. At least eight people have died and hundreds were injured as chaos broke out during Scott’s performance on Saturday night in what would become one of the deadliest crowd-control disasters at a concert in United States’ history. Want to know what happened? Well, so do we -- so let’s try and piece things together now on the Dark Side of Fame.

Travis Scott | The Dark Side of Fame: https://youtu.be/oIsJDMDM1VE

We strive for accuracy and fairness. If you see something that doesn't look right, or you just want to check out my social media pages: 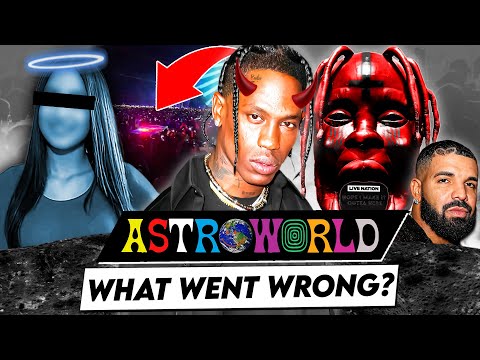 Travis Scott | The Dark Side of Fame | The Tragic Outcome of Astroworld Fest SUBSCRIBE: https://www.youtube.com/user/MrMccruddenmichael?sub_confirmati...