FOXBORO, MA -- Buccaneers Quarterback Tom Brady spoke to the media following his team's 19-17 win over the New England Patriots Tom Brady mentioned he’ll be a part of the New England community after he retires.

Q: What were your thoughts?
TB: Obviously very tough game. Came down just a couple plays. Glad we were able to win, and sorry to keep you guys waiting. Wasn't anticipating this.

Q: Were you surprised or did you think you would get – you got a few jeers while you were playing, but when you came out for warmups people went nuts.
TB: It was awesome.

Q: People were chanting. Did that surprise you?
TB: I'm not surprised. I tried not to predict what was going to happen and how I would feel. Had a few emotional in the moments this week just thinking about the people that have really meant so much to me in my life and that are a part of this community. Just very grateful for an amazing time here. Like I said, my football journey took me somewhere else, but I'm really enjoying that, and great to get a win. 3-1, I know to make it about the game, but 3-1 against a really good football team tonight is what we wanted to get done.

Q: Can you talk about your interaction with Bill Belichick on the field and in the locker room after the game?
TB: Yeah, I mean, all those are personal. We got a personal relationship, you know, for 20-plus years. He drafted me here. We've had a lot of personal conversations that should remain that way and are very private.And I would say so much is made of our relationship. You know, as I said earlier this week, from a player's standpoint you just expect the coach to give you everything he's got, and I'm sure as a player that's what he was hoping from me. But nothing is really accurate that I ever see. It's all kind of – definitely doesn't come from my personal feelings or beliefs. I got a lot of respect for him as a coach and obviously a lot of respect for this organization and all the different people here that try to make it successful.

Q: Going up against some of these guys in practice, is there a different feel when you do it in a game?
TB: I mean, doesn't count in practice, so nothing matters if you get touchdowns or interceptions. It all counts out here. It was a tough, hard-fought game. It was very typical Patriot type weather. Very tough to come into the environment. I thought the fans did a great job. That little – what do they call that horn, that foghorn or whatever? That thing is loud as can be. You don't think about it much when the defense is on the field. I just happened to be on the field when that thing was going off. It's a great home field advantage. The fans were amazing. Just happy for our team personally just for us to get a win in a really tough environment. It's tough to do in the NFL.

Q: When you ran out of the tunnel and you do your 100-yard run that you've done so many times and you ended in the opposite end zone, what was the first thought there?

TB: I couldn't run through the normal tunnel, so, yeah, just happened to be the opposite way tonight. Just a lot of emotions. It was a very emotional week. Again, these guys are like my brothers, you know what I mean?

There are two groups of people, all my Bucs teammates that I love and I'm going to battle with every week, and then there is another group of guys that I see, and those are my friends that I been with for a long time. Matt Slater and Kyle Van Noy and Dont'a Hightower and John and Devin [McCourty] and David Andrews and Hoyer. There is a whole crew. Josh [McDaniels]. These are the people that I've shared my life with. Very grateful for everything they've kind of contributed to my life. Very blessed.

Q: I know you said winning means more to you, but being able to get the NFL passing record, what did that mean?
TB: Yep. I just think it's amazing statistic in that so many people can share in it with me. Quarterback doesn't throw and catch. Quarterback can just throw it. It's yards. Passing yards have to be caught, so I just hope that everybody who caught passes from me over the years just had a little smile on their face tonight knowing they contributed to a very cool record. There are some people that have kind of preceded it by name, Drew Brees who I look up to, hell of a guy. Peyton Manning who is one of my all-time favorites. Brett Favre, Dan Marino.But obviously my teammates who caught all these passes over the years, mean an awful lot to me. 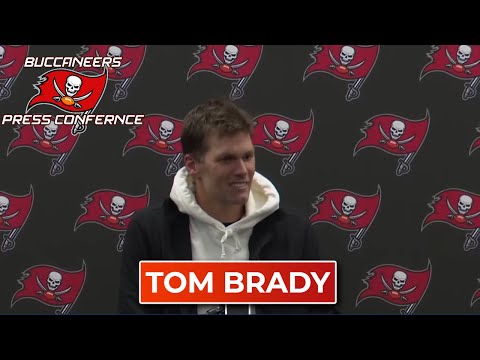