The Toughest Exam in China, 20,000 People Compete for One Position | Hardest exam

In recent years, the number of applicants for the civil service exam in Mainland China referred to as CSE, has been increasing. This year, the number of applicants for CSE exceeded 2 million, a record high. Civil servants have high social status, various benefits, and high hidden income, no need to work overtime, and don’t have to worry about being fired. For young people struggling under the working modes of 996 or 007 in private companies, passing the CSE and becoming civil servants will allow them to lie flat comfortably.
The registration for the CSE in Mainland China in 2022 ended on October 24. The 2022 CSE plans to recruit 31,242 people, and 2.123 million passed the examination qualification review. The average competition ratio is 68:1, which is much higher than last year's 61.26:1. The hottest position is the first-level chief officer of the Tibet Ngari Prefecture Postal Administration. The plan is to recruit only one person, but the number of applicants reached over 20,000, and over 19,000 people have passed the qualification review.
The popularity of CSE reflects three issues: first, it reflects young people's view of career choices, that is, they are more inclined to relatively stable jobs within the governmental system; second, it reflects the disappearance of many good jobs in China due to the withdrawal of foreign companies, which has reduced the employment opportunities for young people; Third, due to the economic downturn, the employment situation of young people is quite bleak, and a large number of college and university graduates cannot find jobs, so the CSE becomes a very good opportunity for them.
Analyzing the current employment situation in China, jobs can be roughly divided into two categories, namely, jobs within the system and jobs outside the system.
In 2016, China’s Human Resources and Social Security Ministry announced that the number of civil servants reached 7.16 million, and some scholars have projected that including all the taxpayer-supported employees of public institutions and state-owned enterprises, the total number of public employees exceeds 70 million.
But it is not that easy to get a job in the system. The highest level in the system is civil servants.
Firstly, applicants have to pass a political qualification review.
Secondly, it is necessary to pass a highly competitive examination. Many good jobs have a competition ratio of more than 100:1.
Even if they pass the highly competitive written test and interview, they still have to pass the physical examination.
In addition to the examination, there is another way to become a civil servant, which is getting approval by the heads of government agencies, and this has given rise to various corruption and scandals.
Recently, the second trial of Xu Yan, a special police officer in Guannan County, Jiangsu Province, for extorting nine officials, has sparked a public outcry.
Why are civil servant jobs so popular, and how many benefits are there for being a civil servant? Let's summarize:
Of course, the popularity of the CSE this year is not only because of the temptation of welfare and social status but also because of the difficulty for young people to find jobs. The withdrawal of many large foreign companies such as Samsung has worsened China's unemployment issue.
#CivilServiceExam#ToughestExam#HardestExam#EmploymentRatio#LaborMarket#QualificationReview#CSE#XuYan#
All rights reserved.

The Toughest Exam in China, 20,000 People Compete for One Position | Hardest exam 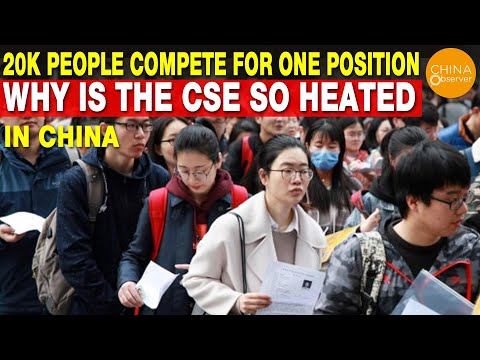 In recent years, the number of applicants for the civil service exam in Mainland China referred to as CSE, has been increasing. This year, the number ...