This paper was presented to the American Merchant Marine Veteran's Annual Convention in Baltimore, Maryland on September 223 2001 by Sal Mercogliano, Chair of the Department of History, Criminal Justice and Political Science at Campbell University.

This presentation, addressed the first six months of the Second World War, following US entry, when Japanese I-Boats and German U-Boats launched dual offensive against the American coasts. The paper deals with the background to these attacks, including the experience of the United States during the First World War, efforts to prepare the nation for the Second World War, and the creation of organizations, such as the Maritime Commission, the War Shipping Administration and the US Maritime Service. It also discusses the essential role the American merchant marine - both its international trading fleet and its domestic coastal fleet - played in supplying and maintaining the supply line to Europe, Hawaii and Australia.

If you enjoyed the video, check out others in the American Merchant Marine playlist on this channel:
https://youtube.com/playlist?list=PLRU6nSO2dZn7v22K7gjLnAKqT2rtwmzKL 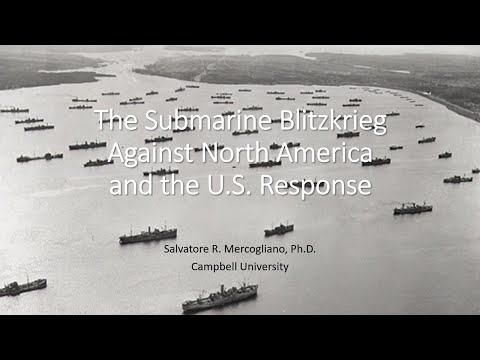 What's Going on With Shipping? January 2, 2022 This paper was presented to the American Merchant Marine Veteran's Annual Convention in Baltimore, Mary...