The Life and Legacy of Harry Bridges

"Harry Bridges was one of the most influential labor leaders in US history. Frequently at odds with conservative elements in the labor movement, and often vilified by employers and government officials, Bridges made the International Longshore and Warehouse Union into a progressive pillar of US trade unionism.

Bridges’ most remarkable contribution to labor history comes through his involvement in the Great Maritime Strike of 1934. He was a much respected rank and file leader of the ’34 strike, a strike that shut down west coast ports, led to an unprecedented three-day general strike in San Francisco, and violent confrontations on the docks. It also established the ILWU as a largely democratically controlled union, a powerhouse able to confront employer transgressions. In subsequent years Bridges was hounded by accusations of Communist Party membership and persecuted in a series of government deportation and perjury hearings. Despite his trials, Harry managed to helm the ILWU through the turbulent years of World War II and Cold War McCarthyism, increasing the union’s power and standards of living for workers. By the 1960s Bridges had moderated his beliefs and tactics, and retired from the union in 1977. His career is a testament to the ability of working people to combat arbitrary employer control and improve the living and working conditions of regular people."

This FREE virtual tour is brought to you by the Foss Waterway Seaport with special support from the Port of Tacoma and Columbia Bank as we get ready to celebrate the new display in the Seaport.

The Life and Legacy of Harry Bridges 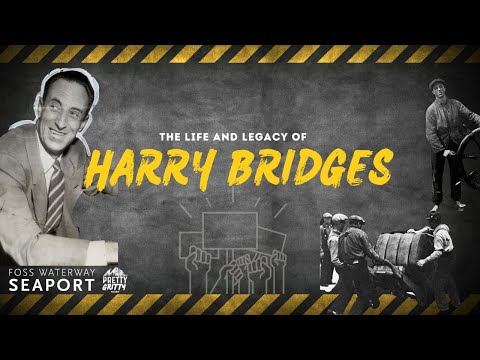 "Harry Bridges was one of the most influential labor leaders in US history. Frequently at odds with conservative elements in the labor movement, ...