This video is of Rick Streacker’s HVACR Training Symposium presentation: “The Impact of Static Pressure on Fan and Blower Motors” Static pressure acts on both sides of a blower, so it plays a major role in the operation of fan and blower motors.

A residential condensing fan might only have a static pressure of about 0.3”w.c, and higher static pressure is often associated with a dirty coil and a higher amp draw on the motor. A motor with a higher load due to increased static pressure will likely run slower and hotter.

Centrifugal fans are also known as forward-curve blowers. Unlike the axial fan, a centrifugal fan brings air through the inlet, changes its direction by ~90 degrees, pressurizes it, and discharges it. When there is no static on the blower, it will operate at a higher amperage, more slowly, and hotter. Centrifugal fans need higher static pressure to work optimally.

We can think of the load on the motor as “boxes of air” (CFM), and that value will be influenced by horsepower, restrictions, and system design. Centrifugal fans that have to work harder to move more boxes of air will run higher loads, which may lead to overload conditions. The filter or furnace door will provide a restriction and increase the static pressure, decreasing the load on the motor, making the amps drop, and helping the motor run more quickly.

In most cases, the HVAC/R system design is tailored to a specific load and has a relatively small operating window, and the fans and blowers need to operate within that envelope. That’s why we like low amps, but amperages that are too low to move air effectively are undesirable. If the load is above or below what the motor has been designed for, the motor’s performance and longevity will drop. Even if a restriction keeps the fan or blower motor in its intended operating envelope, a dirty filter or coil could also affect the capacitor’s longevity.

Sometimes, technicians replace blower wheels but keep the housing. A mismatch can cause the performance to drop, so we want the replacement blowers to match the characteristics of the first blower wheel. To pick a good replacement, we need to be able to tell the wholesaler what our target CFM and static pressure are.

In many cases, we’re dealing with air-over motors, which means that the air itself is what keeps the motor from overheating (compared to belt-drive motors, which are self-cooling). The right load needs to be on the motor; otherwise, the motor will overheat. So, the replacement motor should be equal to the amps of the original motor but not more than 25% stronger. Upon replacement, we need to check the motor amps with all of the components in place.

ECMs (electrically commutated motors) are sometimes variable-speed motors, but they are all air-over motors and rely on the proper load for cooling. However, ECMs tend to be easier to design for the appropriate static pressure. So, we can factor loads into the design more easily, whether the ECMs are used in fans or blowers. In fans, ECMs tend to be constant-speed motors, but their designs can be refined for blowers and tend to be more variable than PSC motors, but they can’t overcome very bad static conditions. Fans and blowers react to static pressure the same way, but the motors themselves react differently.

Read all the tech tips, take the quizzes, and find our handy calculators at https://www.hvacrschool.com/. 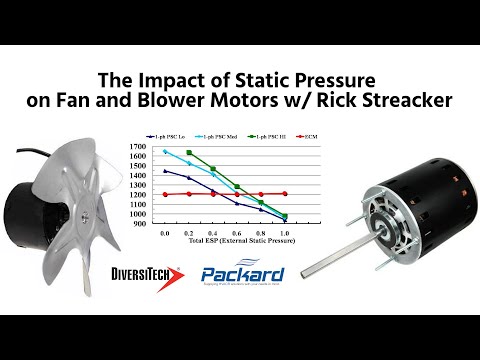 This video is of Rick Streacker’s HVACR Training Symposium presentation: “The Impact of Static Pressure on Fan and Blower Motors” Static pressure acts...