Within the Third Reich, Reinhard Heydrich was one of the most powerful members of Hitler's Inner Circle. Heydrich was referred to by Hitler as, 'The Man With The Iron Heart,' such was his brutality. He was placed in control of overseeing the occupied Czech lands of Bohemia and Moravia, and he dealt with the resistance during the Second World War brutally. He was referred to as, 'The Butcher of Prague,' or as simply, 'The Hangman' as he would order large scale executions of the population. However in 1942, Heydrich was assassinated.

Following his death, there was a huge funeral that took place in Berlin for Reinhard Heydrich. Hitler was involved in the ceremony, and then he was buried inside of the Invalidenfriedhof inside of Berlin. This is a famous cemetery where many German military heroes including the Red Baron are buried, but during the Battle of Berlin, Heydrich's grave marker went missing. But disturbingly in 2019, Berlin Police confirmed that Heydrich's grave inside of the cemetery had been broken into and it had been disturbed. It was believed that the location of his grave had been lost to time, but it was known to people inside Berlin.

The Police confirmed that under the cover of darkness, a grave robber had gone into the cemetery and tried to dig up the remains of Reinhard Heydrich, but they had not stolen his remains. Why this happened remains a mystery, and still today it appears that the Police do not know why or who tried to rob the grave of Heydrich. But what is the story behind this?

Join us today as we look at, 'The DISTURBING Grave Robbing Of Reinhard Heydrich.' Remember to support our channel, please make sure to subscribe.

Thanks for watching! Support the channel by subscribing, liking, and sharing.

TheUntoldPast does not accept any racism, profanity, insults, sexism or any negative discussion aimed at an individual. TheUntoldPast has the right to delete any comment with this content inside it and also ban the user from the channel.

Music - I Am A Man Who Will Fight For Your Honour - Chris Zabriskie. 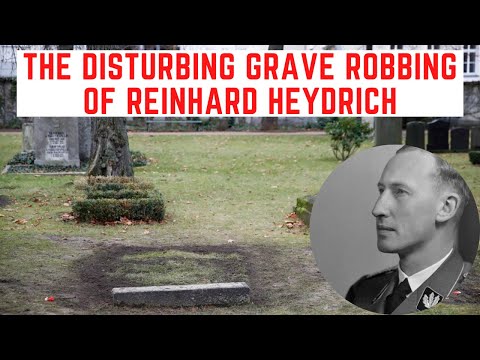 Within the Third Reich, Reinhard Heydrich was one of the most powerful members of Hitler's Inner Circle. Heydrich was referred to by Hitler as, 'The M...