"The Code of Ethics for Combating Sexual Harassment in the Workplace" on Wednesday, March 31, 2021

Drafted by the Top 50 Most Influential Women in Egypt Forum, in cooperation with the National Council for Women and the Ministry of Planning and Economic Development, the Code of Ethics was formed in an effort to create a safe work environment that is respectful and free from all forms of violence, including harassment, prejudice and persecution due to gender.
Furthermore, Dina Abdelfattah shared the incentive behind creating the Code, as several harassment incidents surfaced in Egypt and were met with a general culture of silence and shame that also exists in the workplace.
Moreover, Lobna Helal highlighted the development of the Code against a strong and elaborate legal framework that is embedded in the Constitution. The Code was created in a way to ensure institutions adopt policies, raise awareness, and set mechanisms and channels to create an environment with zero tolerance for harassment.
Additionally, Ambassador Moushira Khattab elaborated on measures needed to implement the Code of Ethics.
Followingly, Ed Barney shed light on the significance of preventing violence against women and girls and supporting their economic empowerment as themes across the UK's work in Egypt.
Efforts to combat harassment include partnering with the World Bank and the National Council for Women to launch a gender equality seal, awarded to private sector companies for contributing to high standards of gender equality.
______________________________________________________________________
Events Partners
@Banque du Caire بنك القاهرة
@CIBEgypt
@Polaris Parks
@QNBGROUP

"The Code of Ethics for Combating Sexual Harassment in the Workplace" on Wednesday, March 31, 2021 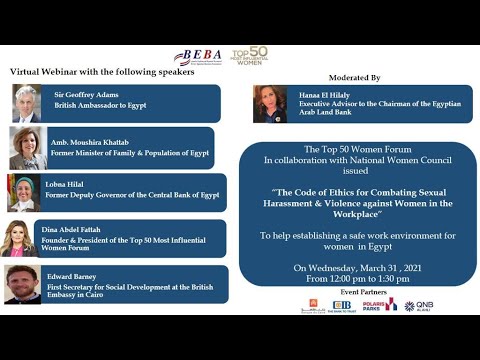