The Brettheim hangings, 10 April 1945, and the postwar search for justice.

On 7 April 1945, the tanks of the 4th US Armored Division under General Patton were in Rot am See, only six kilometers to the south west of the village of Brettheim, advancing in a southerly direction towards Crailsheim. Resistance in the area was only offered by the XIII SS Corps, since 24 October 1944 was under the command of SS Gruppenfuehrer Leutenant General Max Simon.

In Hausen am Bach, 25 Hitler Youths fresh from basic training and probably aged 17 and 18 were housed in the inn. They were under the command of a disabled Wehrmacht NCO called Kurz who wanted to let them go home. Kurz sent four of them to Brettheim suggesting that from there they were allowed to go home. Four Hitler Youths, armed with three Panzerfaust bazookas, hand grenades and one rifle, arrived in Brettheim to defend the village against the 4th US Armored Division.

The arrival of the four Hitler Youths at around 08:30 caused upset at the Brettheim dairy. Friedrich Hanselmann was a fifty year old farmer that also headed the local voluntary fire brigade and was a member of the Home Guard – the Volksturm. Together with his friend Friedrich Uhl and a group of villagers, after a scuffle which resulted in a shot being fired, he took the weapons from the boys, gave them a slap on the face and sent them back to where they had come from. Then Hanselmann, Uhl and a 15-year-old dairy assistant called Schwarzenberger amongst others, threw the weapons into the pond on the outskirts of the village.

When the boys returned to Hausen around 3km away, the Hitler Youth reported to their NCO. He called the NSDAP district leadership in Rothenburg, which ordered him to have the weapons removed from the pond. The NCO set off for Brettheim with all of his 25 Hitler Youths.

In the meantime, the commanding officer SS-General Max Simon had learned of the incident. He instructed the 34 year old SS-Sturmbannführer Friedrich Gottschalk, to clean up the "mess" in Brettheim.

When the SS arrived in the village, they summoned the residents to the town hall for questioning. Uhl was still able to escape because he had been warned. Other residents denied responsibility or knowledge of the incident. Meanwhile Gottschalk threatened to indiscriminately shoot residents and burn the whole village down if the the guilty were not named. As the ringleader, Hanselmann came forward voluntarily to protect the village and its residents. SS-Sturmbannführer Gottschalk put together a court martial with 63 year old Leonhard Gackstatter who had been the mayor since 1910, and the teacher and NSDAP local group leader 42 year old Leonhard Wolfmeyer as assistant judges. Gottschalk presided over it. Hanselmann and Uhl were sentenced to death by Gottschalk. Gackstatter and Wolfmeyer refused to sign the judgment which led to them being placed under arrest.

Hanselmann, Wolfmeyer and Gackstatter were taken to Rothenburg. A new court martial was convened at Schillingsfürst which this time included the 35 year old Wehrmacht Major Ernst Otto and was presided over by Max Simon. He confirmed the earlier death sentence on Hanselman , and now sentenced Leonhard Wolfmeyer and Leonhard Gackstatter to death for undermining military strength.

As the judge, Max Simon also ordered ithat Hanselmann, Gackstatter and Wolfmeyer be executed by hanging. On the evening of 10 April 1945, tables and chairs were set up by the Hitler Youth under the lime trees at the entrance to the cemetery in Brettheim. A beam was placed between the two lime trees.

The three men were hanged with signs around their necks that read: “I am the traitor Hanselmann”, and with Gackstatter and Wolfmeyer: “I stood in defence of the traitor.”

The SS further ordered that the corpses could not be removed, under the threat of hanging ten more men who would be chosen at random.

In order to terrorise the population, Max Simon had a poster printed in his corps area between Crailsheim, Ansbach, Rothenburg and Ingolstadt.

There are five names on it. As well as the three men who were hanged in Brettheim, there is a fourth man from Brettheim, Uhl, who managed to escape from the SS after being warned what was happening. The first name on the list is that of Volksturmann Johann Rößler who deserted from the Volkssturm and fled home where he was captured. Simon had Rößler shot.

None of this stopped the 4th US Armored Division, once it decided to advance towards Brettheim. At around eight in the morning of Tuesday 17 April 1945, the Americans called on the mayor and the population to show white flags. However as the SS had declared that Brettheim was the “cornerstone of German defence” and the village was now defended by mountain troops, no white flags were shown. At around nine in the morning, the US artillery opened fire. At around 11:45, fighter bombers using incendiaries and fragmentation bombs attacked, resulting in the deaths of 18 people and the destruction of almost all of the village.

The Brettheim hangings, 10 April 1945, and the postwar search for justice. 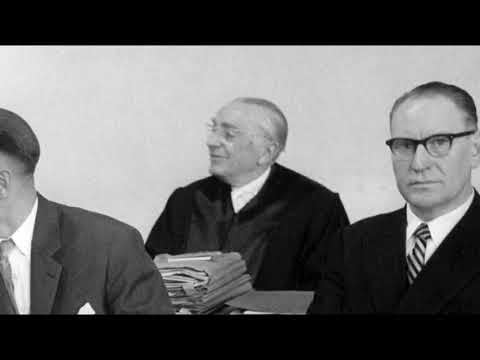 On 7 April 1945, the tanks of the 4th US Armored Division under General Patton were in Rot am See, only six kilometers to the south west of the villag...