THE BOYS Season 3 Episode 4 Breakdown & Ending Explained | Review, Easter Eggs, Predictions, Theories And More. We review, recap and explain the fourth episode of The Boys Season 3 on Amazon Prime Video. The Boys Trailer gave us a taste but Season 3 has a lot more including the rivalry between Homelander, Hughie, Soldier Boy, Payback, Billy Butcher and more. We also get a shocking cliffhanger that leaves a lot up in the air for the future.

Ok so the Boys Season 3 Episode 4 is now out and it's time to take a butchers at all the easter eggs, hidden details and things you missed in it. There's also major callbacks to the comic in this episode and we'll be talking about what originally happens in them and comparing it to what we get here.

So far the season has had homelander teasing that he's going off the deep-end but this episode he really goes supersonic.

Oop spoiler alert and as I'm sure you can guess we will be talking about everything so if you haven't had a chance to check it out then I highly recommend that you check out now. With that out the way, thank you for clicking this, now let's get into the Boys Season 3 Episode 4.

Now we open the episode with the real life american TV show Solid Gold hosting Soldier boy. This series started in 1980 and it ran for 8 years, hosting several singers and dancerslike what we get here. The show was criticised for being pretty corny and the New York times stated that it devolved into becoming a parody of itself due to soap opera-esque storylines that we sewed throughout the series. The tracks were also heavily mimed, meaning that it was all image which of course mirrors Vought.

Soldier Boy performs the song Rapture by Blondie which made it's tv debut on Solid Gold. It's credited as being the first ever rap video broadcast on MTV but it has a bit of a controversial legacy to it. Debbie Harry is often mistakingly said to be the first rapper which, yeah isn't true and it devalues Kool Herc a bit who is said to have kickstarted the genre. However, you have others that say she recognised the artform and brought it to the masses which helped to propel hip hop into the mainstream. There's some reflection here in Soldier Boy who's credited as being a hero but really he killed some of MM's family.

Mother's Milk is of course a massive rap music fan and we see him watching the performance and remembering when he saw it as a kid with his family. There's also flashes of a toy car and we learned in the newspaper clippings that Soldier Boy forced his family's car off the road which killed several of them. 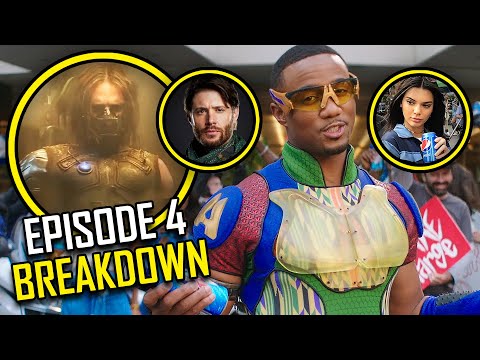