"They used to kill us with guns, now they kill us with deforestation and dams." The Brazilian government's failure to protect the Amazon forest is forcing the Munduruku indigenous people to take action against land grabs and illegal logging - and try to save the rain forest on their own.

In an unprecedented movement led by Chief Juarez Saw Munduruku, for the last six years indigenous people have been fighting the theft and destruction of their forest home.
Since 1970, 20% of the Brazilian Amazon has been deforested. Logging and forest fires are threatening a further 20%. Scientists say that at 40% deforestation, we will reach the point of no return. The forest will be lost forever, replaced by savannahs - and the environmental consequences will be catastrophic. The Amazon is often known as ‘the lungs of the planet,’ producing 6% of the world’s oxygen. It is no secret that the rainforest has been losing a dramatic fight against an array of threats, encouraged by capitalism, consumerism and greed - both legal and illegal.

In today‘s Brazil, some 600,000 square kilometers of land - an area about the size of France -- are farmed by farmers who don’t officially own it. The military dictatorship (1964-1985) encouraged them to settle on state-owned land, but the farmers never became legal owners. As a result, speculators now seize the areas, clear the forests, then resell the plots with forged title deeds. This land grab, known as "grilagem" in Portuguese, has led to uncontrolled forest clearing and fierce conflicts.

The documentary was shot from 2014 to 2020, under three different Brazilian governments. It provides deep insights into the drama of the illegal occupation of state land and forest areas by organized crime groups. Several indigenous peoples have united under Juarez Saw Munduruku, leader of the Munduruku people, in a last-ditch bid to save the planet’s most important forest. 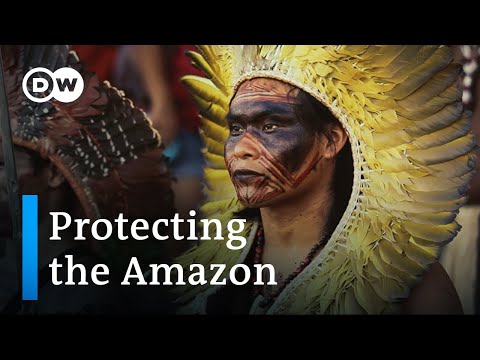 "They used to kill us with guns, now they kill us with deforestation and dams." The Brazilian government's failure to protect the Amazon for...