"That's not my meth pipe in my pocket, officer!"

From the report of Las Cruces Police Officer James Borden, lightly edited for clarity: On November 25, 2020, at approximately 0845 hours, I was dispatched to the Quality Inn located at 2200 South Valley for a report of disorderly subjects. Central dispatch advised responding units that two females, neither of whom were guests of the hotel, were inside the main lobby throwing things around.

Upon arrival, I noticed that Officer Kinney had made contact with two females who matched the descriptions provided by dispatch, as well as one male. I went inside the main lobby and asked an employee at the front desk if they wanted the male trespassed as well. The employee told me that if the male was not a guest that she wanted him trespassed.

I went back outside and advised Officer Kinney that the front desk wanted the male trespassed as well. Officer Kinney was in contact with dispatch verifying the names of the subjects when he advised me that Andrea Hernandez, later identified as Andria Evaro, was not coming back on file. I approached her and requested her social security number. When I ran her by SSN, dispatch advised that Ms. Evaro had a warrant out for her arrest. I asked dispatch to confirm the warrant.

Once the warrant was confirmed with central dispatch, I told Ms. Evaro to stand up and I placed her hands behind her back and put her in handcuffs. I double locked the handcuffs and gauged for tightness.

I escorted Ms. Evaro to my patrol unit and conducted a search incident to arrest. Once I completed the search, Ms. Evaro was placed into the back of my patrol unit. I buckled her into the seat. I asked Officer Kinney, who had the male in custody, if there was anything else he needed and he replied no. I left the location and headed to dispatch to obtain the warrants, advising central of my mileage.

"That's not my meth pipe in my pocket, officer!" 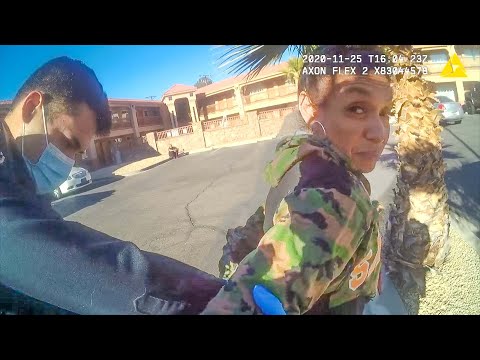 From the report of Las Cruces Police Officer James Borden, lightly edited for clarity: On November 25, 2020, at approximately 0845 hours, I was dispat...