Targets of Tyranny: How to Survive Being an Enemy of the State

WATCH more Glenn Beck at https://blazetv.com/glenn
Glenn once warned that one day you’d wake up and not recognize your country any more. Are you there yet? Governments at every level have been weaponized against Americans. The FBI shows up in full tactical gear at the homes of pro-lifers, terrifying young children and grandmas for the "crime" of peacefully protesting abortion. The ATF surprises legal gun owners on their doorsteps, demanding to see their firearms. State governments are trying to sneak in laws that allow the sexual mutilation of children — without the parents’ consent. When we become confused as to what the government can and cannot do, we become numb to tyranny and take it on the chin, as we did with the COVID-19 mandates. And when the state comes knocking, we don’t know how to deal with it because we haven’t lived in that kind of country since 1791. Glenn warns we’re on the same road as every empire that ended in collapse. Glenn features the stories of everyday Americans who have experienced government tyranny firsthand:

•A gun shop owner who encountered a bone-chilling inspection by the ATF
•A father fighting for the right to see his twins after objecting to his 3-year-old son going through gender transition
•A woman who had almost $1M seized from her bank accounts even though she and her husband were never charged with a crime
•A couple who had their home raided by the FBI over a case of mistaken identity
•An FBI agent who turned whistleblower after he became fed up with the abuses he saw over Jan. 6 raids.

But tyrants can only exist when the people they are trying to subjugate forget that there are fundamental rights granted not by the state, but by a higher power. And we have the blueprint to stop tyranny dead in its tracks. The founders armed us with the tools — we just need to know how to wield them. So how do peaceful Americans stand up to tyranny that comes in the disguise of “law”? Glenn and a panel of legal experts including Sen. Mike Lee arm you with the answers — so you'll know what to do when the government comes knocking on YOUR door next.

Targets of Tyranny: How to Survive Being an Enemy of the State 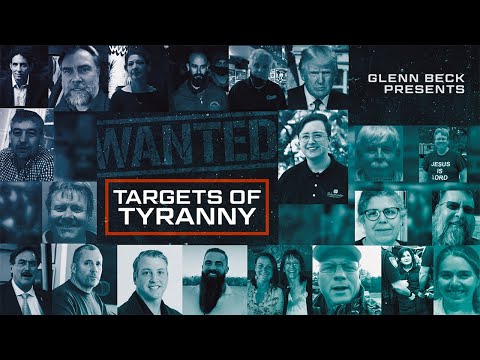 WATCH more Glenn Beck at https://blazetv.com/glenn Glenn once warned that one day you’d wake up and not recognize your country any more. Are you there...