The Biden Administration announced its federal vaccine mandate for employers who have over 100 workers in November 2021. A federal court swiftly halted the mandate, saying that President Joe Biden overstepped his authority. However, last month an appeals court reinstated the mandate. The president is now asking the Supreme Court to uphold the mandate while former Vice President Mike Pence filed an amicus brief opposing it. The Supreme Court is set to hear oral arguments this Friday. President at the National Catholic Bioethics Center, Doctor Joseph Meaney, joins to share his thoughts on the federal mandate and its lacking religious exemptions. Health care workers across the nation have quit or been fired due to vaccine mandates. Dr. Meaney talks about the ethical issues with denying Americans adequate access to health care because of staff shortages. Members of the military have also faced challenges with the mandate. Meaney expands on that. The FDA announced last month that women can order abortion pills though the mail. The president of the National Catholic Bioethics Center discusses the ethical implications of having such easy access to ending a life. He also explains what bioethics issues he is currently following.

Don't miss out on the latest news and analysis from a Catholic perspective.
Get EWTN News Nightly delivered to your email: https://ewtn.com/enn 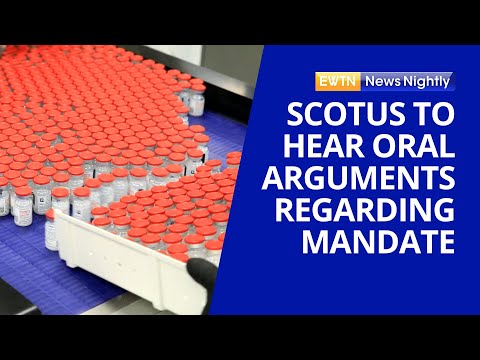 The Biden Administration announced its federal vaccine mandate for employers who have over 100 workers in November 2021. A federal court swiftly halte...