The extraordinary life and legacy of legendary journalist Cokie Roberts—a trailblazer for women—remembered by her friends and family.

Steven V. Roberts has been a journalist for more than 50 years. He is the author of My Father’s House and From This Day Forward, which he co-wrote with Cokie. He is the chief political analyst for the ABC radio network, a professor of journalism and politics at George Washington University, and a nationally-syndicated columnist. He lives in the home in suburban Washington that Cokie grew up in and they shared for 44 years.

Nina Totenberg is NPR’s award-winning legal affairs correspondent. Her reports air regularly on NPR’s critically acclaimed newsmagazines All Things Considered, Morning Edition, and Weekend Edition. Totenberg’s coverage of the Supreme Court and legal affairs has won her widespread recognition. NPR received the prestigious George Foster Peabody Award for its gavel-to-gavel coverage — anchored by Totenberg — of both the original hearings and the inquiry into Anita Hill’s allegations, and for Totenberg’s reports and exclusive interview with Hill.

Martha Raddatz is ABC News chief global affairs correspondent and co-anchor of “This Week with George Stephanopoulos.” She has covered national security, foreign policy and politics for decades – reporting from the Pentagon, the State Department, the White House and conflict zones around the world.

Judy Woodruff is the anchor and managing editor of the PBS NewsHour. She has covered politics and other news for five decades at NBC, CNN and PBS. At PBS she was the chief Washington correspondent for the MacNeil/Lehrer NewsHour. She also anchored PBS’ award-winning documentary series, “Frontline with Judy Woodruff.” At CNN in, she served as anchor and senior correspondent for 12 years; among other duties, she anchored the weekday program “Inside Politics.” She returned to the NewsHour in 2007, and in 2013, she and the late Gwen Ifill were named the first two women to co-anchor a national news broadcast. After Ifill’s death, Woodruff was named sole anchor.

“She was a trailblazing figure; a role model to young women at a time when the profession was still dominated by men; a constant over forty years of a shifting media landscape and changing world, informing voters about the issues of our time and mentoring young journalists every step of the way.” –President Barack Obama

Through her visibility and celebrity, Cokie Roberts was an inspiration and a role model for innumerable women and girls. A fixture on national television and radio for more than 40 years, she also wrote five bestselling books focusing on the role of women in American history. She was portrayed on Saturday Night Live, name checked on the West Wing, and featured on magazine covers. She joked with Jay Leno, balanced a pencil on her nose for David Letterman, and was the answer to numerous crossword puzzle clues. Many dogs, and at least one dairy cow, were named for her. When the legendary 1980s Spy Magazine ran a diagram documenting all her connections with the headline “Cokie Roberts – Moderately Well-Known Broadcast Journalist or Center of the Universe?” they were only half-joking.

Cokie had many roles in her lifetime: Daughter. Wife. Mother. Journalist. Advocate. Historian. Reflecting on her life, those closest to her remember her impressive mind, impish wit, infectious laugh, and the tenacity that sent her career skyrocketing through glass ceilings at NPR and ABC. They marvel at how she often put others before herself and cared deeply about the world around her. When faced with daily decisions and dilemmas, many still ask themselves the question, ‘What Would Cokie Do?’

In this loving tribute, Cokie’s husband of 53 years and bestselling-coauthor Steve Roberts reflects not only on her many accomplishments, but on how she lived each day with a devotion to helping others. For Steve, Cokie’s private life was as significant and inspirational as her public one. Her commitment to celebrating and supporting other women was evident in everything she did, and her generosity and passion drove her personal and professional endeavors. In Cokie, he has a simple goal: “To tell stories. Some will make you cheer or laugh or cry. And some, I hope, will inspire you to be more like Cokie, to be a good person, to lead a good life.” 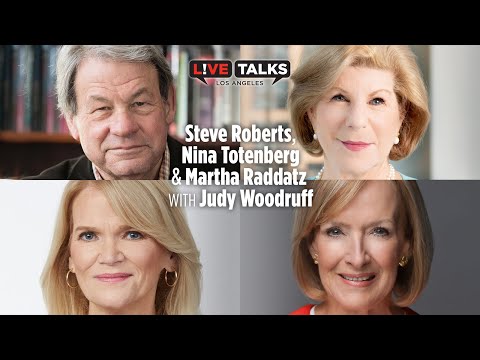