Some states intend to weaken child labor protections as a direly needed solution to the hiring shortage as millions of Americans strike for better pay and conditions. Bills under consideration will allow younger workers to work longer hours. Critics of the policy point to research demonstrating the adverse impact of child labor on academic performance and behavior. So are America's youth standing at the threshold of new opportunities, or at the brink of exploitation? RT America's John Huddy reports. Then Prof. Richard Wolff, host of "The Economic Update" weighs in. He calls it "shameful," exploitative, historically retrograde and "downright perverse."

Artists involved in the reimagining of the iconic Superman as a bisexual who eschews "the American way" for "a better tomorrow" were suddenly in need of heightened police protection when the deluge of criticism that greeted their provocative update included worrying death threats. Author and filmmaker Sean Stone joins RT America's Faran Fronczak to share his insights.

We examine the Republican sweep in Virginia on Tuesday that saw the Republican candidate Glenn Youngkin chosen as next governor of the Democratic-leaning state, which hadn't seen a Republican in statewide office for 12 years. RT America's Natasha Sweatte sums up the results before Democratic strategist Jonathan Harris and Ed Martin of Phyllis Schalfly Eagles debate the election's significance. They also return to questions and predictions from their Tuesday appearance on this program and revisit them on the other side of Tuesday's elections.
#QuestionMore #RTAmerica

Check out our other shows!

It’s her take on all things political and she presents ALL the angles: News.Views.Hughes with Scottie Nell Hughes, NVH: https://bit.ly/NVHSHOW

What’s your NEWS IQ? Give us 30 minutes, and we’ll take you across the globe! In Question with Manila Chan, IQ: https://bit.ly/IQ_SHOW

Steve Malzberg sinks his teeth into the slander, hypocrisy, bias and lies of MSM. MMM…Delicious! Eat The Press: http://bit.ly/EatThePress

Candid conversations with the most outspoken guy in Hollywood! Dennis Miller + One!
Dennis Miller Plus One: http://bit.ly/DennisMillerPlusOne

Let our TV time-machine bring you the week’s highlights and a closer look at the BIGGEST stories, Just Press Play: http://bit.ly/JustPressPlayShow


Author and social critic Chris Hedges conducts fascinating in-depth interviews with the fiercest critics of the establishment. Watch all episodes at https://bit.ly/2QIkQZg

Yep, it’s Gov. Jesse Ventura and you’re living in his WORLD! Come along for the ride.
The World According To Jesse: http://bit.ly/WATJSHOW

They’re watching you. Are you watching them? Are you WATCHING THE HAWKS?
Watching The Hawks: http://bit.ly/WTHSHOW

Follow the twists and turns of the global economy with Boom Bust, the one business show you can’t afford to miss. Boom Bust: http://bit.ly/BoomBustShow

Do you keep missing the forest for the trees? Let Holland Cooke show you the Big Picture, The Big Picture: http://bit.ly/TheBigPictureShow 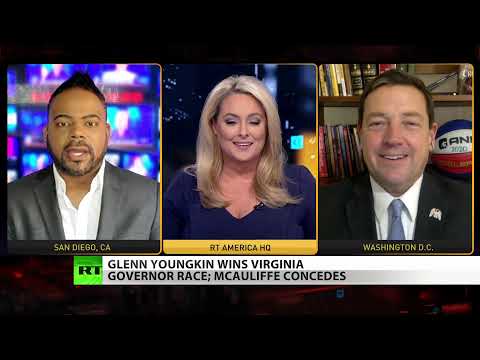 Some states intend to weaken child labor protections as a direly needed solution to the hiring shortage as millions of Americans strike for better pay...