SQUID GAME Breakdown: Every Easter Egg, Clue, Hidden Detail & Ending Explained. We give a full series breakdown of 오징어게임 pointing out all the things you missed in Episodes 1 - 9. This includes a recap of the series and the games that he played in such as Red Light, Green Light, Tug Of War, Glass Hop and The Marbles One. Full Spoilers ahead.

Huge thank you to Super HeroNexus for watching the series along with me - https://www.youtube.com/c/SuperHeroNexus

Ok so the opening of Squid Game may be confusing at first. We watch as the convoluted rules are explained and see kids play it, who are of course Gi Hun and Sang Woo. This flashback is key as it foreshadows how the game will end which was of course with a round of Squid Game.

We jump forward to an Gi Hun who is a lifelong gambler that keeps betting on the wrong horse. He keeps gambling to try and make his life better and he’s actually the perfect person to participate in the games.

In a way he’s similar to the southern gentlemen VIP who keeps picking the wrong contestant. This would foreshadow Joon Ho’s death at the hands of the frontman as the VIP would say ‘I always pick losers’, he picked Jun-Ho to pleasure him only for character to turn around and attack him. Jun-Ho is then caught out in this quote unquote game of life and death and he’s apparently killed…

Now Gi Hun uses lucky numbers of 6 and 8 to win, which they do. However these numbers would appear many times in the show. They always represent the middle of the herd in the race and the numbers are in the middle much like before the bridge challenge. One of the VIP explains why everyone went for the middle and that is to find safety when threatened. It’s better to stay amongst people instead of taking a risk on your own.

Six also appears again as there are 6 games that take place over 6 days and the religious player would later choose the number 6 as it represents the day god made humans in christianity. Funnily enough, Gi Hun won 4.56 million at the horse track, incredibly amazing attention to detail there from the writer.

Now Sae Byeok does end up helping Gi-Hun later on in the bridge game and this may be her paying him back after she pick pocketed him.

Gi Hun’s nice nature would be foreshadowed as even after being chased by violent loan sharks, he would help her when he thought she simply fell over. 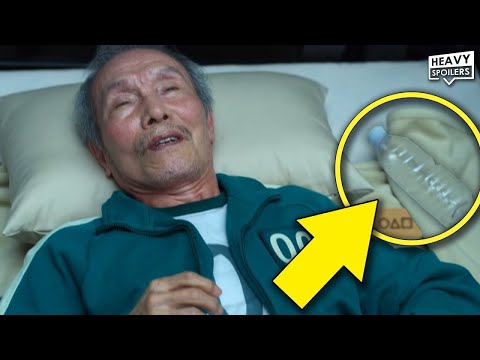 SQUID GAME Breakdown: Every Easter Egg, Clue, Hidden Detail & Ending Explained. We give a full series breakdown of 오징어게임 pointing out all the things y...