Spirit Employee Suspended After Fighting Woman at Texas Airport
An airline agent at Dallas-Fort Worth Airport in Texas was suspended after footage taken on August 11 showed him brawling with a female passenger near departure gates and squaring up aggressively to a male bystander who tried to break up the fight.
In a two-minute video that captured some of the altercation, a male employee, wearing Spirit Airlines lanyard around his neck, squares up to a woman and yells at her as the she gesticulates with her hands toward his face.
“Don’t touch me ever in your life!” the employee shouts. “You touched me first and then you got in my face. Don’t ever invade my personal space!” he says while taking steps toward the woman, and as she steps back away from him. The woman yells “get out of my face” back at him, before shouting a homophobic and racist slur at the employee and shoving him away.
The employee, clearly aggravated, repeatedly tells the woman to stay out of his “personal space.” A male bystander then steps in between them in an attempt to calm the situation, but the woman reaches around him and slaps the employee in the side of the head. The employee breaks free from the bystander, tackles the woman to the ground and, as they both get back to their feet, strikes her in the head from behind.
The woman runs away, onlookers start shouting for the pair to break up the fight, and several other men try to block the employee from pursuing the woman. The employee, exploding with anger, yells at them to stop touching him, prompting the men to back away. He then knocks down some safety barriers obstructing him and sets off again after the woman, yelling: “You got the wrong person!”
The men continue after him trying to stop the pursuit. “Don’t fight that woman, bro!” one man warns him, before standing in front of the employee to block his path toward the woman. When the man tells the employee to fight him instead of the woman, the employee squares up to him and says, “I’ll fight whoever” repeatedly in the man’s face.
The employee tries to coax the man into a fight, saying “knock me out.” Defending his actions, he tells the man, “You saw what she did!” The man tells the employee he didn’t have to touch the woman and instead should have called security. He then walks away from the employee and the video ends a few moments later.
A Spirit Airlines representative confirmed to Storyful that the employee, who works for a vendor at the airport of behalf of the Spirit Airlines, was suspended by the vendor. The representative said the airline was “working with law enforcement” and that it “does not tolerate violence of any kind.”
Credit: Thomas Shannon via Storyful


To download this video for news use you must go to: http://newswire.storyful.com To obtain a Storyful subscription, contact [email protected]

This video has been uploaded for use by Storyful's subscription clients with the permission of the content owner. 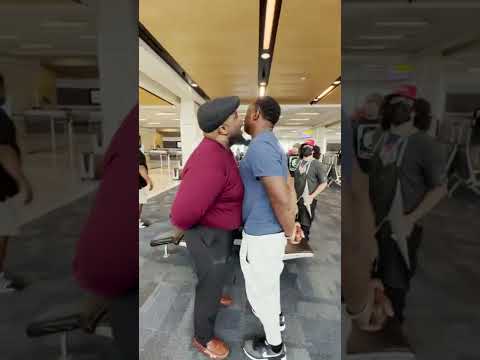 Spirit Employee Suspended After Fighting Woman at Texas Airport An airline agent at Dallas-Fort Worth Airport in Texas was suspended after footage tak...