Texas Senator was confronted during a night out at dinner by Benjamin Hernandez, and once independent candidate from Texas’ 9th congressional district. Hernandez slammed Cruz for still attending and speaking at the NRA conference in Houston just days after the mass school shooting in Uvalde, Texas. Francesca Fiorentini and Wosny Lambre discuss on The Young Turks. Watch LIVE weekdays 6-8 pm ET. http://youtube.com/theyoungturks/live

“A video shows Sen. Ted Cruz of Texas being confronted at a restaurant following his appearance at the National Rifle Association convention in Houston.

Hernandez, an independent, ran for Congress to represent TX-09, which contains portions of Houston, in 2018.

A longer video was posted by Indivisible Houston, a political advocacy organization of which Hernandez is a board member. The video shows the beginning of the exchange, where Cruz posed for a photo with Hernandez before the latter began asking why Cruz refuses to support stricter gun control laws including background checks." 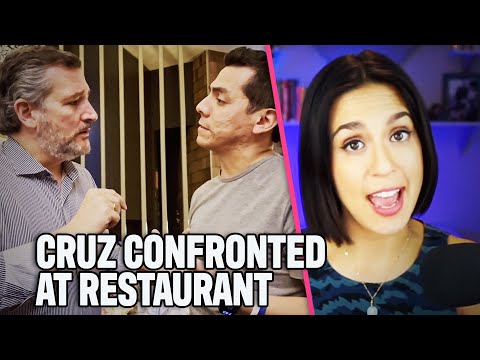 Texas Senator was confronted during a night out at dinner by Benjamin Hernandez, and once independent candidate from Texas’ 9th congressional district...