A troubled man. His missing father. A secretive Kingdom, faraway.

American Jared Morrison has dreamed of meeting his dad since he was a kid.

Like many young Saudi men, Jared’s father came to America to study in the 1970s. At university, he met Jared’s mum and they began a relationship. When she became pregnant, he disappeared back home.

Throughout his childhood and into adulthood, Jared was obsessed with finding his Saudi father.

Jared connected once on the phone when he was in his early twenties but his father rejected him. Now that Saudi Arabia has begun to open up to the world, Jared wants to try again.

Reporter Brietta Hague and Saudi producer Essam Al-Ghalib tell the exclusive story of Jared as he travels to the Kingdom to try and track down his father. It’s a dangerous, fraught and emotionally risky mission.

Jared's family is powerful and well-connected in Saudi and Jared bumps up against the unwritten rules of a deeply conservative society, which values reputation and family honour above all.

Jared is not alone in his quest to connect with his Saudi father.

Saudi men abroad continue to father and abandon children. In Guatemala, we meet a young boy and his single mother, his Saudi father long since departed. Sami Alrajhi Chang visits the mosque every week to learn Arabic in the hope he may one day meet his Saudi family.

Sami’s father Sulaiman came to study in the USA as part of a Saudi government scholarship programme. There he met student Mandre Chang. Despite promising her marriage and a life together, he abandoned Mandre days after Sami’s birth.

Mandre and Sami are part of a global network of people searching for answers. Stone-walled by the Saudi government and embassies, Mandre sought the help of a blog called ‘Saudi Children Left Behind’, a platform encouraging the children and ex-partners of Saudi men to publish their stories of abandonment in the hope they’ll make contact.

'Saudi Children Left Behind' is an untold story about the powerful human impulse to connect with family, against all odds, and a rare insight into the rigid rules governing this hidden Kingdom – rules about kinship, obligation and family honour.

About Foreign Correspondent:
Foreign Correspondent is the prime-time international public affairs program on Australia's national broadcaster, ABC-TV. We produce half-hour duration in-depth reports for broadcast across the ABC's television channels and digital platforms. Since 1992, our teams have journeyed to more than 170 countries to report on war, natural calamity and social and political upheaval – through the eyes of the people at the heart of it all.

Contributions may be removed if they violate ABC’s Online Terms of Use http://www.abc.net.au/conditions.htm (Section 3). This is an official Australian Broadcasting Corporation YouTube channel 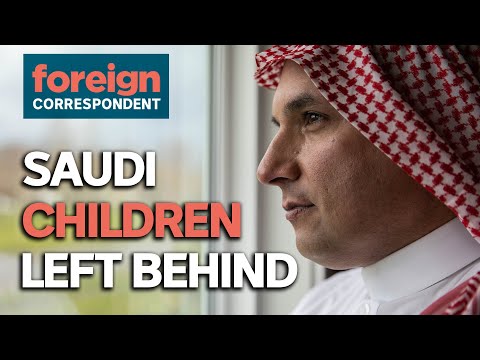 A troubled man. His missing father. A secretive Kingdom, faraway. American Jared Morrison has dreamed of meeting his dad since he was a kid. Like many...