LAHORE: The hunger strike camp set up by sacked government employees was attended by a large number of PFUJ office-bearers here .
Addressing the protesters on the fourth day of hunger strike camp outside Lahore Press Club, Lahore Press Club president Arshad Ansari said journalist community stood with 17,000 employees sacked from various departments. He expressed full solidarity with them and assured them of full support of journalist community.
In his address, he assured the protesters that the federal government has gone for a review appeal in favour of the employees and strongly hoped that all the employees would be reinstated soon.
Arshad Ansari said that it was not a matter of a month, but these employees were fired from start of their jobs. He said that these employees gave golden part of their lives to government institutions and today these same people were sitting helpless on streets.
Khawar Saleem, leader of All Pakistan Sacked Employees, also addressed the participants and termed the struggle a national struggle. He said that it was an exploitation against which these employees were going on hunger strike. He said the sacked employees and their families were battling with hunger and demanded the government immediately restore them.
Representatives of the sacked employees and participants pledged on the occasion that the protest would not stop here, but would extend to Islamabad where they will stage a sit-in outside the National Assembly. The protesters also chanted slogans in support of their demands. 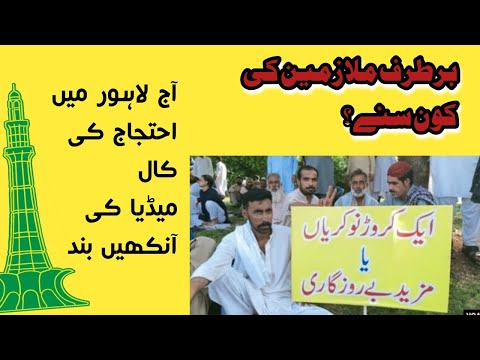