CNBC's Valerie Castro joins Shep Smith to report the attorneys for the armorer for 'Rust' are suggesting a disgruntled employee may have intentionally put a real bullet in the box of dummy ammunition on the set. They provided no evidence of this claim. For access to live and exclusive video from CNBC subscribe to CNBC PRO: https://cnb.cx/2NGeIvi

The producers of “Rust” have hired a high-profile law firm to interview cast and crew about the accidental on-set shooting of Halyna Hutchins last Thursday.

The appointment of Jenner & Block comes just hours after the Sante Fe County district attorney told The New York Times that “everything at this point, including criminal charges, is on the table.”

In a letter to cast and crew obtained by NBC News, the “Rust” producers said the Occupation Safety and Health Administration is in the process of investigating the workplace death of Hutchins.

“In addition to cooperating with authorities, we hired a legal team from Jenner & Block to conduct an investigation of the events” the memo said. “We have stressed that they will have full discretion about who to interview and any conclusions they draw.”

“We know that reliving this tragedy will be hard, but your participation is important for all of us to be able to fully understand what happened, and we encourage you to share your perspective,” it continued.

The letter reminded cast and crew that investigators want witnesses to preserve any information they have pertaining to the case, including emails, texts, drives and paper documents.

“If you have any question about whether something should be preserved, please err on the side of preservation,” the memo said.

Court documents released Friday show actor Alec Baldwin was handed a loaded weapon by assistant director Dave Halls who indicated it was safe to use in the moments before the actor fatally shot Hutchins and wounded director Joel Souza.

A search warrant filed in a Santa Fe court shows that the assistant director did not know the prop gun was loaded with live rounds.

Halls had previously been fired from the set of “Freedom’s Path” in 2019 after a crew member incurred a minor and temporary injury when a gun unexpectedly discharged, a producer on the project told NBC.

There were also reports that the gun that killed Hutchins was used by crew members for live-ammunition target practice. The Wrap was the first to report this detail.

Additionally, a person familiar with the matter told NBC News that half a dozen camera crew workers walked off the “Rust” set in protest of working conditions just hours before the shooting took place. Among their concerns were multiple accidental discharges of the prop gun. 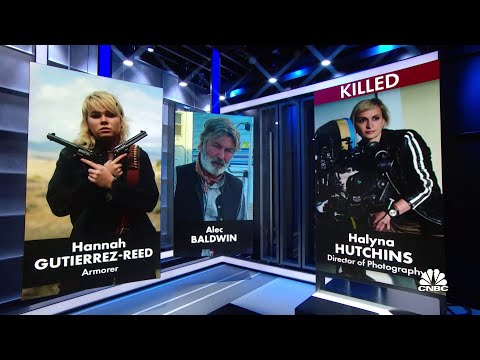 CNBC's Valerie Castro joins Shep Smith to report the attorneys for the armorer for 'Rust' are suggesting a disgruntled employee may have intentionally...