(3 Oct 2021) A rights worker for the Norwegian Refugee Council said on Sunday that the organization believes up to 5,000 migrants could have been detained in a major arrest campaign in Libya since Friday.
It is believed that it is the most intense crackdown on migrants in the country in recent years.
Alexandra Saieh, Libya advocacy manager for the Norwegian Refugee Council, said that the organization had heard from refugees "scared to leave their homes" because of the roundup, for fear that they could be taken to the country's dangerous detention centers.
A major operation by Libya's police forces has resulted in the detention of at least 4,000 migrants, including hundreds of women and children, officials said Saturday.
The U.N. said at least one young migrant was shot dead and 15 others injured, including two in serious conditions amid the arrests.
The raids started Friday in the western town of Gargaresh as part of what authorities described as a security campaign against illegal migration and drug trafficking.
The Interior Ministry, which led the crackdown, made no mention of any traffickers or smugglers being arrested.
Gargaresh, a known hub for migrants and refugees, is about 12 kilometers (7.5 miles) west of Tripoli, the Libyan capital.
The town has seen several waves of raids on migrants over the years, but the latest one was described by activists as the fiercest so far.
Since the 2011 NATO-backed uprising that ousted and killed longtime dictator Moammar Gadhafi, Libya has emerged as the dominant transit point for migrants fleeing war and poverty in Africa and the Middle East, hoping for a better life in Europe. 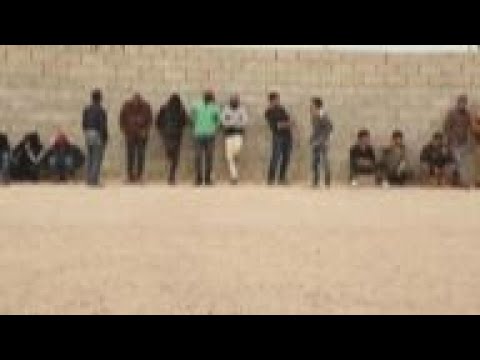 (3 Oct 2021) A rights worker for the Norwegian Refugee Council said on Sunday that the organization believes up to 5,000 migrants could have been deta...