Protest in support of sex workers' rights in Venice

(24 Oct 2021) Activists and sex workers fighting for the rights of sex workers gathered in Venice on Sunday to participate in the project "UMBRELLA: Twenty years of activism under red umbrellas".
The project will take place until October 30.
The rally marked the twentieth anniversary from the first demonstration organized by the Committee for the Civil Rights of Prostitutes, led by activist Carla Corso, during the Venice Biennale in 2001.
That year, a group of sex workers marched through the streets of Venice with red umbrellas as part of the "Pavilion of the Prostitutes" where Slovenian artist Tadej Pogacăr presented the installation "CODE:RED",  an exhibition reflecting on the world of sex workers.
Holding red umbrellas, a symbol of protection from abuses, violence and prejudices, activists replicated their march on Sunday, walking from Santa Lucia rail station through iconic Venice's streets.
They arrived in Casa Punto Croce, a meeting spot in Campo (Square) San Giacomo dell'Orio, where Pogacăr presented the exhibition "CODE:RED".
Activists also presented an exhibition of photographs of sex workers as part of the project "United Under a Red Umbrella: Sex Work around the World", a book by Mariska Majoor and Robin Haurissa, published in 2018 by the Prostitution Health Centre of Amsterdam, that gathers photos and interviews of sex workers.
During the week, activists plan to hold meetings and realize other initiatives to discuss the conditions and rights of sex workers, twenty years after they started their fight and gave birth to the movement.

Protest in support of sex workers' rights in Venice 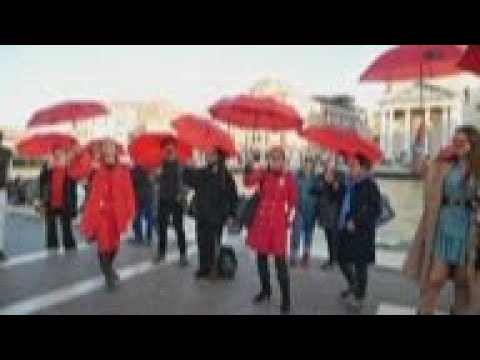 (24 Oct 2021) Activists and sex workers fighting for the rights of sex workers gathered in Venice on Sunday to participate in the project "UMBREL...