Salt Lake City has earned the maximum score possible on the Human Rights Campaign’s Municipal Equality Index. The score of 100 is a marked improvement over the 66 the City received in 2019, just before Mayor Erin Mendenhall took office. The shift illustrates the City’s commitment to LGBTQ+ people and rights.

“I’m happy to see our hard work on LGBTQ+ inclusion in our ordinances, policies and services recognized by the Human Rights Campaign’s index,” said Mayor Mendenhall. “It’s so important for us to keep examining our own practices and implementing needed changes so our capital city remains a welcoming place for LGBTQ+ people to live and work.”

The MEI examines how inclusive municipal laws, policies, and services are of LGBTQ+ people who live and work there. Cities are rated based on non-discrimination laws, the municipality as an employer, municipal services, law enforcement and leadership on LGBTQ+ equality. The City’s 2021 score of 100 is a first for any city in the state of Utah and contrasts previous years, where the City received scores ranging from 66 to 87.

The City earned additional points this cycle by adopting significant policy changes including coverage of gender-affirming surgery for employees and their dependents as part of the City’s benefits package, and the Mayor’s public advocacy for protections. Other points were earned for documentation of City practices already in place, including ongoing contributions to organizations like the Utah Pride Center and Utah AIDS Foundation for their live-saving contributions.

"We commend Mayor Mendenhall and the Salt Lake City Council for their unwavering support of LGBTQ Utahns,” said Troy Williams, executive director of Equality Utah. “We are also grateful to the decades of allied leadership from City Hall that has brought us all to this historic moment. We have long known that the capital city is a home and a refuge for our community. Our families have been welcomed and loved here. Salt Lake City is the vanguard for justice and equality in the Beehive State."

Williams and other leaders from local LGBTQ+ organizations joined the Mayor and City Council Members in front of the City & County Building Wednesday to raise the City’s Pride flag in celebration. 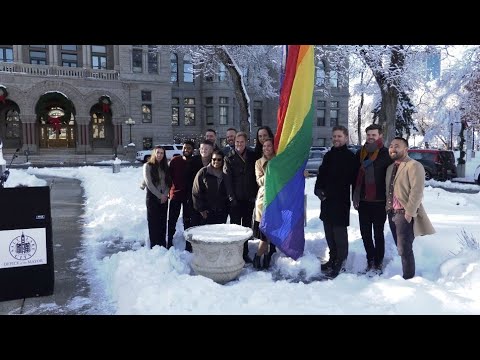 Salt Lake City has earned the maximum score possible on the Human Rights Campaign’s Municipal Equality Index. The score of 100 is a marked improvement...