President Joe Biden delivers remarks in Atlanta, Georgia, on the need for voting rights legislation. For access to live and exclusive video from CNBC subscribe to CNBC PRO: https://cnb.cx/2NGeIvi

President Joe Biden on Tuesday issued his most explicit call yet for the Senate to bypass its filibuster rule to pass voting rights bills, calling the move necessary “to defend our democracy” against Republican-led restrictive voting laws pushed around the country.

“Today, I’m making it clear, in order to protect our democracy, I support changing the Senate rules whichever way they need to be changed to prevent a minority of senators from blocking action on voting rights,” Biden said during a highly publicized speech in Atlanta.

“When it comes to protecting majority rule in America, the majority should rule,” he said. “This is the moment to decide to defend our elections and to defend our democracy.”

Biden’s speech came as the Senate prepares to vote this week on two bills that would represent a sweeping update to the nation’s federal voting rights laws.

The current legislation would expand early and absentee voting and make it easier for people to comply with state voter ID laws. It would make automatic voter registration the national standard and restore incarcerated people’s right to vote after they finish their sentences.

“It is my intention to once again bring legislation to the floor to fight back against the threats to democracy and protect people’s access to the ballot,” he said Tuesday.

Schumer added that if the GOP blocks voting legislation, “we must consider the necessary steps we can take so the Senate can adapt and act.”

Bypassing the filibuster to pass voting legislation gained traction within the party after Democrats temporarily changed Senate rules to increase the U.S. debt ceiling with a simple majority last month. While the party could pass a bill on its own if it scrapped the filibuster, at least two Democrats — Sens. Joe Manchin of West Virginia and Kyrsten Sinema of Arizona — have not supported a filibuster carveout.

Every Senate Republican has opposed federal voting laws put forward by Democrats in the last year. GOP leaders argue Congress should not take a bigger role in elections run by states.

They have also downplayed the effects of Republican-led voting laws passed in states including Georgia, where Biden chose to speak Tuesday.

Senate Minority Leader Mitch McConnell, R-Ky., contended Tuesday that Schumer is pushing Democrats into “breaking their word” and “breaking the Senate” so that “one political party can take over our nation’s elections from the top down.”

Biden’s speech came amid intense pressure and, in some cases, pointed criticism from fellow Democrats who believe the president has focused too much on negotiating with senators to pass his economic plans in Congress at the expense of other issues like voting rights.

Civil rights groups and voting rights advocates have called on Biden to spend as much energy on trying to expand ballot access as he has on pushing to pass a bipartisan infrastructure package, which succeeded, and the Build Back Better Act, which has stalled.

“Unless President Biden applies the same level of urgency around voting rights as he did for BBB and infrastructure, America may soon be unrecognizable,” he said.

“It’s time for this administration to match their words with actions, and for Congress to do their job. Voting rights should not simply be a priority — it must be THE priority,” Johnson said. 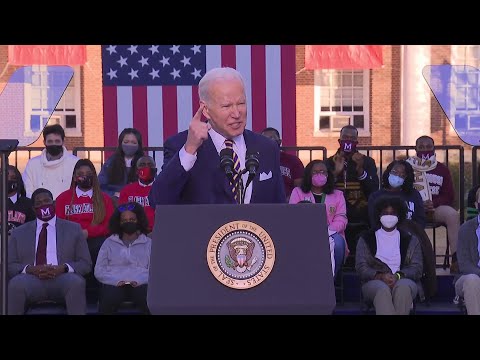 President Joe Biden delivers remarks in Atlanta, Georgia, on the need for voting rights legislation. For access to live and exclusive video from CNBC ...