It's finally here! As promised we will start with the Lich Mythic Path. We will complete all side quests and dialogues. When I pick up special new weapons and items I will stop to show you stats, so you can decide if it would help in your own playthroughs. My main romance will be Camellia but I will also have romantic dialogue with Sosiel & Daeran. Until I get undead party members, my party will consist of Regill, Sosiel, Lann, Nenio, and Camellia. Questions, comments, and feedback are most welcome down below. If you enjoy the content please be sure to like, share, and subscribe to the channel!

Pathfinder: WOTR is an isometric single-player role-playing story game currently in development by Russian studio Owlcat Games and published by Deep Silver, based on Paizo Publishing's Pathfinder franchise. Announced through a Kickstarter campaign in February 2020, the game will be released for PC, Microsoft Windows, and macOS on September 4, 2021. A console version for Xbox Series X, Xbox Series X Gameplay, PS5, PS5 Gameplay, Playstation 5, Playstation 5 Gameplay, will be released at a later date. The game is a sequel to Pathfinder: Kingmaker.

In WOTR the realm of Sarkoris was destroyed when Areelu Vorlesh opened a rift to the abyssal planes of existence, and hordes of demons invaded the world of Golarion. Led by the evil Demon Lords Deskari, Baphomet, and Nocticula, the abyssal forces crushed all who stood against them, turning Sarkoris into a demon‑infested land now known as the Worldwound. Join the Crusade against the demonic invasion and rise as a new hero wielding unimaginable powers in this classic CRPG. The fate of this world lies in your hands.

Pathfinder has dozens of classes and subclasses with thousands of abilities, feats, spells, talents, and buffs to choose from. The spell listing allows you to choose from Evocation (Damage Dealing), Enchantment (Crowd Control), Necromancy (Undead), Abjuration (Buffs), Illusion (Crowd Control), Divination (Buffs/Disruptor), and Conjuration (Summoning). This is combined with an insane amount of class/subclass options including Alchemist, Arcanist, Barbarian, Bard, Bloodrager, Cavalier, Cleric, Druid, Fighter, Hunter, Inquisitor, Kineticist, Magus, Monk, Oracle, Paladin, Ranger, Rogue, Shaman, Skald, Slayer, Sorcerer, Warpriest, Witch, and Wizard! It is Owlcat's goal to give each of these classes at least 5 subclasses each!

Choose your Mythic Path and embody an Angel, Demon, merciless Lich, wily Trickster, superhero Azata, law incarnate Aeon, truly evil Swarm, merciful Gold Dragon, or forgo all of them to stand alone as a Legend. Each path will allow you to improve your hero in unique ways, adding a new layer to character development and making your hero and their allies a true match for their powerful enemies.

FTC Legal Disclaimer - Some links found in the description box of my videos may be affiliate links, meaning I will make commission on sales you make through my link. This is at no extra cost to you to use my links/codes, it's just one more way to support me and my channel! :) 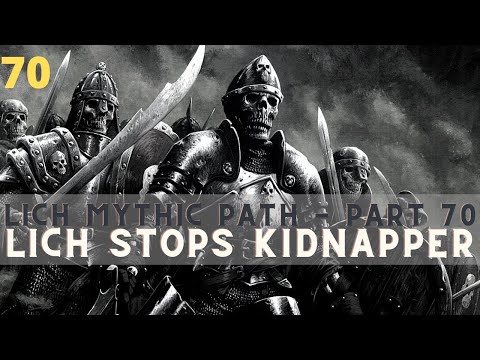 It's finally here! As promised we will start with the Lich Mythic Path. We will complete all side quests and dialogues. When I pick up special new wea...