Like I told you in one of my videos, making it to the NBA is an amazing feat alone. Being able to play for the league AND get the Most Valuable Player award is on a completely different level. LeBron James, Michael Jordan, Kobe Bryant—some of the names who have received this prestigious award throughout their careers. Usually, an MVP award indicates the best talent in the entire league, and rightfully so. However, sometimes fans think of the MVP title as some kind of popularity contest, which it isn’t. For that reason, players like current MVP Nikola Jokic are highly underrated and underappreciated among NBA fans.
In this video, we will talk about the main ones and look through Nikola Jokic’s MVP case. We will talk about why Jokic is so underrated by NBA fans and analysts, and why he might be one of the most underappreciated Most Valuable Player award winners in the league’s history. Also, I would really like to hear your opinion, as I’m very curious about what you, my dear subscribers, NBA fans, and just passing-by viewers, think about the league’s future. Now grab some snacks, get yourself comfortable, and enjoy this video. But before that, smash that like button, subscribe to the channel if you haven't done so already, and hit that notification bell to get updates on our latest NBA content.

It is not really a common thing when an MVP is not popular with the league’s fanbase. However, Nikola Jokic might single-handedly carry this title, being the most effective yet being a so-called ‘uninteresting’ player to follow. Fans bash his slow, fundamental style; they are pushing a narrative that he is a bad defender, has no leaping ability, and he is overall unathletic. Well, Nikola is a one-of-a-kind player, and it doesn’t make sense to overlook his biggest advantages, which he certainly does have.
When it comes to distinguishing features, Jokic is absolutely in a class by himself. In Denver, Jokic commands the offense in a similar manner. Treating him as a point guard who defends centers rather than a center who leads the offense provides a whole different viewpoint. Jokic is expected to take a lot of shots for the Nuggets, especially during the playoffs. His lack of exceptional defense has a somewhat greater influence on his total impact than a guy like James Harden or Stephen Curry's lack of elite defense, but both are consensus top 5 players in the NBA today, and Jokic plays offensively in a similar manner to both. improvement from Jokic as his individual numbers show more effort and defensive understanding.

Jokic's increased defensive RPM indicates an improvement in the metrics as well.
Not only NBA fans but the league itself undermine Jokic’s skillset. Sure, the NBA is a business, and that means that they will promote players that are loved by the fans the most. That makes Nikola’s last year's MVP award even more important. Jokic is so effective on the court that he can win this title even without a fan base.
Nikola Jokic has continued to shine for the Denver Nuggets even with all the doubters.

And his teammates and NBA personas around him prove that. According to the Nuggets’ coach, Mike Malone, the brilliant center has become one of the more "disrespected" reigning MVPs in recent memory. It is easy to see why, since both have contributed at a high level to help their teams finish towards the top of their respective leagues' rankings.
Jokic isn't Dirk Nowitzki, but he's a capable 3-point shooter and a capable midrange shooter.

But don’t think that Jokic doesn’t have any fans at all. There are people who appreciate his playing style, and I am among them. Jokic is what the game of basketball is all about. Nikola is the perfect combination of all what European basketball represents. And whether or not people want to say things like that, there's no questioning Nikola Jokic's efforts for the Nuggets this season. He has also been playing some of his greatest defense in his career, doing everything he can to help his team win.
Nikola Jokic of the Denver Nuggets is doing things that this league has never seen before.
Last season, Jokic was named the league's MVP. Given that he has had to play the entire season without Jamal Murray and Michael Porter Jr.
Overall, Nikola Jokic has been out right great.

Tell us what you think in the comments down below, and once again, make sure to leave a like on this video and hit that subscribe button to catch up with the best NBA content.

If you like this video, make sure to watch my other videos about recent NBA news! Thank you for watching!

Related videos:
Nikola Jokic Is Having Another MVP Season & Haters Know It
https://www.youtube.com/watch?v=-4vT0_htgQI

Are We SURE Jokic Is The MVP??
https://www.youtube.com/watch?v=D9raxIrY_Ag 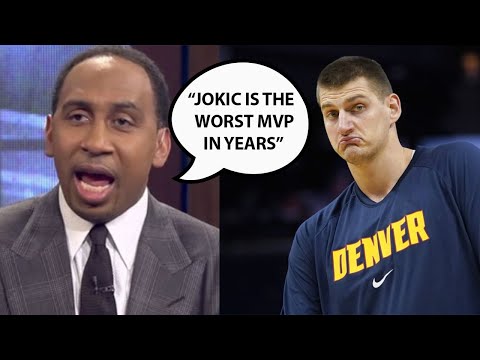 Like I told you in one of my videos, making it to the NBA is an amazing feat alone. Being able to play for the league AND get the Most Valuable Player...