Nick Cave on faith, grief, and music: The Newsnight Interview

The artist talks about the death of one of his fifteen-year-old twin sons, Arthur, seven years ago, and how he has addressed loss and grief through music, particularly his hugely lauded album Ghosteen.

He talks about his new book, Faith Hope and Carnage, which is distilled from a series of telephone conversations during lockdown between Cave and journalist Sean O'Hagan, in which the musician talks about questions of belief, faith, grief, love and his music.

In a rare TV interview, Kirsty Wark also hears about his project, The Red Hand Files, in which he solicits questions online and then responds to the ones which pique his interest with advice and musings which are often tender, and sometimes funny.

Nick Cave on faith, grief, and music: The Newsnight Interview 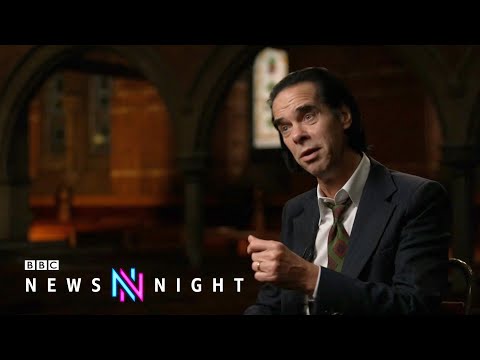 The singer songwriter Nick Cave, best known for fronting his band Nick Cave and the Bad Seeds, talks to BBC Newsnight.    The artist talks about the d...