Garrett Bush of 92.3 The Fan recaps Monday Night Footballs Matchup between the Cleveland Browns and the Pittsburgh Steelers. The Steelers sent Ben Roethlisberger out as a winner in what was likely his final game at Heinz Field. Pittsburgh's 26-14 win over the Browns on Monday night also served as retribution for the Steelers, who 358 days earlier fell to Cleveland in the AFC wild card round.

The win kept Pittsburgh (8-7-1) alive in the AFC wild card race with one week left in the regular season. The loss ensured that Cleveland (7-9) would finish the season with a losing record a year after winning its first playoff game in 26 years.

Ahead 19-7, the Steelers received a scare when the Browns scored on Baker Mayfield's 1-yard touchdown pass to Harrison Bryant with 1:10 left. But the Browns' threat was short-lived after Minkah Fitzpatrick recovered the ensuing onside kick. Three plays later, Harris put the game on ice with his 37-yard touchdown run down the far sideline.

The Steelers struck first on Roethlisberger's 5-yard touchdown pass to Diontae Johnson less than five minutes into the second quarter. The drive was extended after Browns defensive end Jadeveon Clowney was penalized 15 yards after he threw Chase Claypool's shoe on a third-and-10 play.

From there, the Steelers received field goals of 22, 30, 50 and 48 yards from Chris Boswell, as Pittsburgh led 10-0 at halftime and 16-7 with about 10 minutes remaining. Led by Watt's four sacks, the Steelers' defense bewildered Mayfield and the Browns' offense. Pittsburgh sacked Mayfield nine times while setting up Boswell's second field goal on Arthur Maulet's second-quarter interception.

Boswell added two more field goals to the Steelers' tally before the Browns capped off a 17-play drive with Bryant's touchdown reception. Cleveland was unable to complete the comeback, however, as Harris rumbled for the game-clinching score three plays after Bryant's score.

The win gives Roethlisberger a 92-32 all-time record at Heinz Field as the Steelers' quarterback. Roethlisberger improved to 26-3-1 against the Browns, who famously passed on the Findlay, Ohio, native in the 2004 NFL Draft. 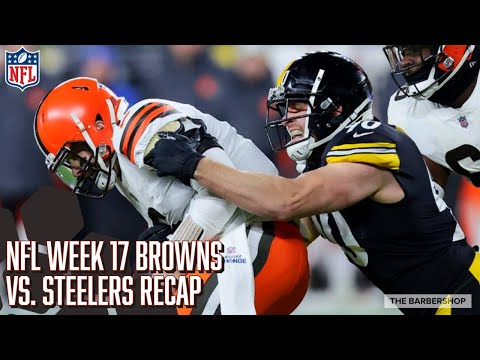 Garrett Bush of 92.3 The Fan recaps Monday Night Footballs Matchup between the Cleveland Browns and the Pittsburgh Steelers. The Steelers sent Ben Roe...