This is the moment a female cyclist is knocked to the ground and suffers a shoulder injury after a passing perv apparently gropes her bottom from a car passenger window.

The incident took place in the town of Palmas in the Brazilian state of Parana on 26th September, and the culprit was arrested two days later for sexual harassment and causing bodily harm.

The footage shows a man putting his hand out of the car window to apparently grope a female cyclist’s behind. However, the driver apparently gets too close and the woman is knocked off her bike.

She falls hard on the tarmac as several onlookers, who apparently see the incident, rush over to help.

According to police, four people were in the car at the time of the offence and they have all been identified.

In an interview on the TV chat show ‘Encontro com Fatima’, the cyclist, named Andressa Lustosa, age not disclosed, said she filed a police report and shared the images on social media to help find those involved.

She said: "I think it's time for someone to take action. We can't tolerate this type of situation anymore. It's humiliating for us women not to be able to go out and participate in physical activity. You can't go out on the street out of fear. What's that about? In the 21st century? It's sad. That's not normal.”

Andressa, who said she suffered some minor injuries to her body including a badly-scratched left shoulder, added: “Someone has to stop these aggressors, these abusers, they have to understand that they came from a woman, they have to respect us.

“This form of abuse is happening every day, to all women. All the time, women are attacked, they are abused. It is a problem rooted in our society. The backwardness of our values is clear. Women are treated as an object and that is not who we are, a woman needs to be respected.”

The police said the suspects were identified after an anonymous tip and at least one, the man who committed the act, has been arrested.

According to the police, the suspected harasser has claimed his arm was already outside the car and he did not realise he had hit the cyclist.

The arrested suspect will be held liable for sexual harassment and causing bodily harm, the same crimes the car driver will face when he is tracked down.

One of the group members, who was sitting in the back seat of the car, told the police that they were all drunk at the time.

A police spokesperson said: “He informed us that all the individuals who were there were drunk. According to this individual who was in the back seat, he told his colleagues not to touch the woman because it could cause an accident, but it still happened."

The police said they are continuing to investigate the case and are trying to identify more witnesses. Officers will also probe the claim of drunkenness. 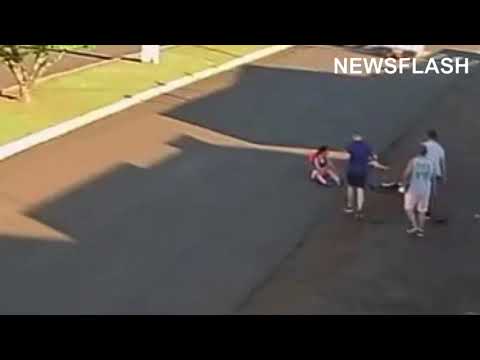 This is the moment a female cyclist is knocked to the ground and suffers a shoulder injury after a passing perv apparently gropes her bottom from a ca...