Hey guys, what’s up? I have a question for you. Would you want to pick a fight against a professional boxer? What about a boxer who literally has been one of the best in history? I do not know about you, but my answer would be an obvious "no." But, it seems that some of us are crazy enough to think we can take on such legends and, get this, even win! Well, it seems like the Paul brothers are going to keep things head-on with just about everyone. Who could challenge a sport like Mike Tyson? Well, Logan Paul is the answer. And Mike has a few things to say about that. Gentle ol' Mike gave Logan a fair warning though, and today we are going to talk all about it.


Now we all know how crazy Logan and Jake Paul have been ever since they found their ‘calling’ in the form of the gentlemen’s sport. The brothers have been seen time and again challenging notable names in the sport to fight in bouts meant to incorporate the two into mainstream boxing. Undeniably, the matches that came about as a result of such challenges have garnered a lot of recognition for their reverence in the sport and have also been widely watched and enjoyed by fans worldwide. A testament to this rejuvenation is something that even Mike Tyson himself praised just a short while ago.

Mike Tyson said that Logan and Jake Paul have arguably saved boxing and revived the tradition of enjoying the sport in the mainstream media. He claimed that other emerging fighting sports like Mixed Martial Arts and platforms like the UFC were dominating the entertainment market and slowly driving boxing out of business. However, with a seemingly absurd intrusion, the Paul brothers beheld spectacles that drew crowds back to boxing. This statement came about as late as October 2021, and Tyson had held the two brothers in very high regard for this achievement. However, it was going to turn into something that Tyson was probably not anticipating.

This entire development had already started taking place much before, albeit in a much less serious nature. Back in January, Logan and Mike met for a podcast for a YouTube Channel. In the video, Logan makes fun of Mike's gentle nature and immediately proceeds to challenge him to a fight, calling him "Iron Mike." Of course, Mike did not take it seriously and explained to Logan that he should stay away from Mike. But Logan persisted, even going on to explain how he was much stronger than the average man to Mike's humorous amusement. Logan jokingly asked Mike to fight him till the death. However, Mike went on to exclaim how Logan will regret it and how it will become the scariest experience of his life. 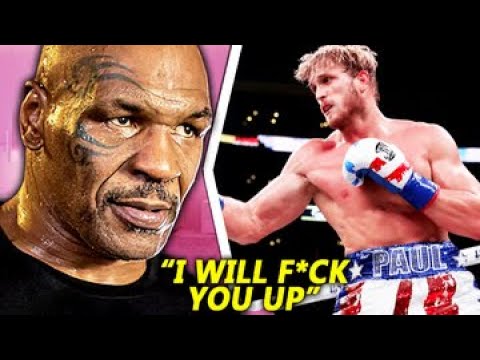 Mike Tyson Warns Logan Paul After Agreeing To FIGHT Him Hey guys, what’s up? I have a question for you. Would you want to pick a fight against a profe...