A migrant workers'' union held a vigil on Friday, to remember the victims of the Nanfang''ao Bridge collapse. Six migrant workers were killed and 13 people injured two years ago on Oct. 1. Speaking at the vigil, the Yilan Migrant Fishermen Union called on the government to respect the rights of migrant worker. It also asked for a memorial plaque to be placed next to the new Nanfang''ao Bridge, which is due to open a year from now.

Chi Hui-jung
National Human Rights Commission
I believe this is something everyone is fighting for – I hope to see a memorial plaque dedicated to the six migrant workers. Because of this incident, I have seen people pay more mind to migrant workers and their rights.

Lee Li-hua
Yilan Migrant Fishermen Union
We call on the government to place importance on their public safety, their work safety, the quality of their lives and their labor rights. This is our important demand.

Chen Chun-sheng
Su-ao Fishermans Association
At this vigil, we commemorate our fallen brothers. Our fisheries could not be without them. They are the force that drives the whole industry.

At the vigil, video clips of the victims'' family members were shown. In one clip, the four-year-old son of a victim asks for a toy robot that looks like his father. His mother tells him to give the robot to his dad, who has to live alone in heaven. In another clip, a victim''s mother cries as she thinks about her lost son. At the end of the vigil, flowers were laid in front of the victims'' photos as a tribute. 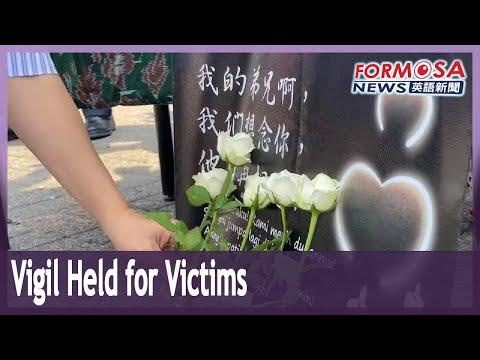 A migrant workers'' union held a vigil on Friday, to remember the victims of the Nanfang''ao Bridge collapse. Six migrant workers were killed and 13 p...