Medjugorje Rare Interview Fr. Petar Secrets reveals "It will be a final call" We are getting closer"

admin
Visit our website at https://mysticpost.com
"It can be said that the secrets concern particular events that will happen at a certain time and place. When this will happen we have not yet known, but we have the present and with each passing day, we are getting closer and closer to that moment .

The message of every secret will contain this teaching: The life that God has given us, the time we live are gifts from God for us. " Father Petar.

To those who ask what Medjugorje is for him, the priest replies without hesitation: “
What follows is a rare video interview with Father Ljubicic who speaks freely about the secrets of apparition hill.


As far as the secrets are concerned, if anybody is interested to know I can say Mirjana has received all 10 secrets.
On behalf of all the Medjugorje Visionaries she will reveal them when the time comes.

It will also be confirmation that as the secrets have been gifted to Mirjana, so each visionary, at that time, will have received all ten secrets.

The first two secrets will be a warning for all those who believe in Medjugorje.

When the secrets are fulfilled all will know the visionaries were telling the truth and that Our Lady was in Medjugorje.

The third secret is the visible sign on Apparition Hill. This will bring great joy to all the people who believed and were living the Gospel and in accordance with Our Lady’s messages.

Ten days before the secrets all will know what is happening and the priest together with Mirjana will fast and pray.

The first two secrets and also the third one are also connected to Medjugorje I we will be obliged to be in Medjugorje for the fulfilment of these secrets.

Are you anticipating that when first three secrets have been announced and fulfilled that the world as a whole will believe in the authenticity of Medjugorje?

I hope it will help many people settle their lives, to convert, to believe and to become new people.

In any case we all know when Jesus came two thousand years ago many miraculous signs occurred.

And the Holy Mass is a miracle, a sign which is occurring everyday. We see how difficult it is to turn the people back to God. It is so difficult to convert people.

I think and hope that when these signs and the secrets are realized that they will help everybody. At least to those who visited Medjugorje.

Of course many people have hoped and prayed and lived according to the Holy Gospel although they have not visited Medjugorje yet.

I hope it will be a final call to all the people for conversion and to return to God and to start to rely on God.

Thank you Father Petar for giving this interview.

Medjugorje Rare Interview Fr. Petar Secrets reveals "It will be a final call" We are getting closer" 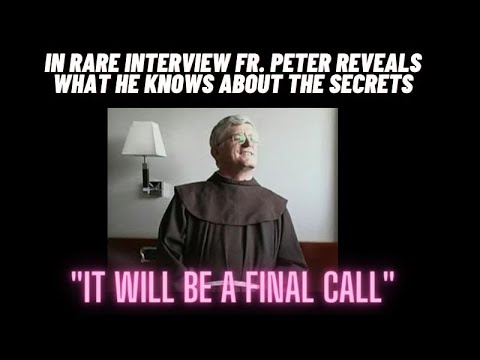 Visit our website at https://mysticpost.com "It can be said that the secrets concern particular events that will happen at a certain time and pla...