Most recently, Newell’s Old Boys, which is Leo Messi's first professional club, published possibly the very first post-match interview of the Argentine. And, not surprisingly, this short video immediately went viral on the web.

So let's go ahead and check out what Leo said in there. We say Vamos and get started!

It happened around the time Leo was 9-11 years old - at the end of the match in which he became the main star and scored twice.

Basically, in relation to Leo’s first steps in football, almost everyone knows about his path, starting with the first contract he signed with Barcelona on that well-known napkin. But not everyone can tell us about the moment when he hit the ball for the first time in his life, who opened this prodigy and what he had to go through before moving to Barcelona. So today, we’re going to tell you about everything that we managed to find out.

In the summer of 1995, 8-year-old Leo was lured to the academy of the local top club - Newell’s Old Boys. And that was really inevitable as the whole Messi family supported this club, while amateur club Grandoli wasn't that ambitious at all.

All the Newell’s youth team players, which was Messi’s new place, were born in 1987. They were the best in the country and got the nickname "The Machine of 87". The team was winning all domestic competitions and achieving success on the international stage. In Leo’s debut match for the new club, Leo scored as many as 4 goals, and his team won with a score of 6:0.

In 2000, “The Machine of 87” won the Argentine League in their age group, being 20 points ahead of their closest rival. Messi’s former partner from Newell’s youth team Gonzalo Mazzia later recalled that they lost just three games during five years while Leo was in the team.

One fact is enough to understand how strong Messi was as a child. Adrian Corea, who was Leo’s coach at Newell’s once said: “He scored at least 500 goals for Newell’s. In those matches, where Messi was unable to score, he went crazy, and then he scored at least 3 goals in the very next game. "

Who knows how Leo's career would have turned out if not for the death of his grandmother, who we already mentioned at the beginning of the video. After this tragedy, the guy stopped growing, and his parents could not afford expensive growth hormone treatment. Newell’s initially promised to help but eventually refused, and this turned out to be a big surprise for Messi’s family.

Meanwhile, Leo’s paternal grandparents, who lived in Catalonia, were looking for a way to help their grandson with all their might, so they managed to get in touch with the Barcelona board representative and convince him to take a look at the boy in action. What happened next was a completely different story, which gave us one of the best players in the history of this game!

This is who Leo talks about in his interview.

In the interview we showed at the very beginning, Leo was mentioning several players. One of them - Lucas Scaglia is the cousin of Messi's wife Antonella Roccuzzo. And it was at Lucas' house at the age of 5 that Leo met the future mother of his children. This is how football influenced Leo's family happiness.

Other players that we saw in the interviews: Lucas Scaglia, Federico Rosso, and Gerardo Grigini also made professional careers in football. Not as successful as Leo, of course. 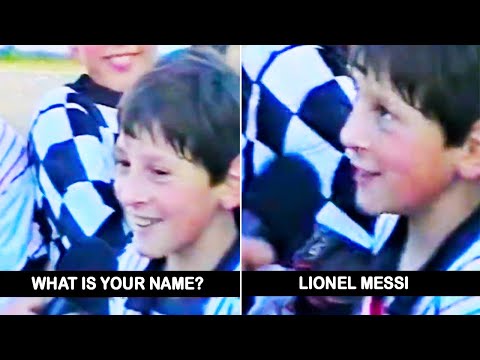