Penn State offensive coordinator Mike Yurcich came to Penn State with a lot of fanfare surrounding his hire. The former Oklahoma State and Texas offensive coordinator drew praise for his ability to score points and create explosive plays for the offense. But unfortunately for Penn State fans, none of that came to pass in 2021 during his first season with the Nittany Lions.

So to get a better sense of what Yurcich is as a play-caller and see what happened last season, the host of the BWI Daily Edition, Thomas Frank Carr, brings PFF senior analyst Seth Galina on the show. Galina is a quarterback coach and evaluates offensive football for PFF. The two discuss quarterback play, the Penn State offense, Sean Clifford, and the game's evolution on the show.

They start with a conversation about quarterback mechanics. In a recent interview on the Paydirt Podcast, Galina brought up rotational throwing, which T-Frank learned about from QB throwing coach Brad Maendler. He has more questions, the biggest of which is; how did we all miss this evolution?

Next, they discuss the Penn State offense and its DNA under Yurcich. First, Galina explains how the passing game worked last year and why it didn't work better. One clue as to why the tight ends weren't more effective comes from the play of Clifford,

"I did see a lot of what we call Y-Cross. Which is a crossing route 18-to-22 yards that crosses over the center of the field. Every team runs this play it's one of the biggest plays in college football right now. I think the issue is there with Clifford is you're talking about smaller-ish windows. I think he needs to be able to say, "I'm good enough to fit that ball in there."

Next, he dives into how the scheme uses space to create matchups for the quarterback and how the play of that position changes the way coordinators can call games. Then T-Frank asks Galina if there's anything he would change about the offense.

One thing that has bothered T-Frank over the last several seasons is the lack of outside-zone running from Penn State's coordinators. But, is that as big of a deal as T-Frank has made it out to be? Galina doesn't think so and explains why.

Finally, they discuss the evolution of offensive football and the RPO. After describing what it is and what it does, Galina gives his thoughts on where the game is going.

Check out the full interview to hear more about the Penn State offense and the game's evolution. 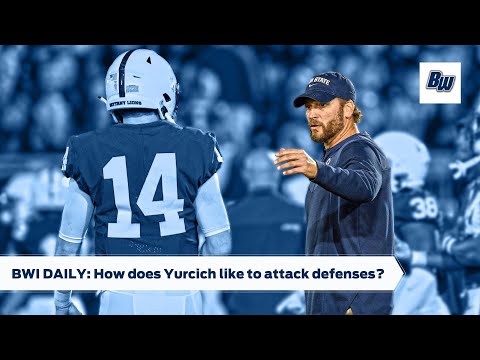